Satellite and the changing natural world 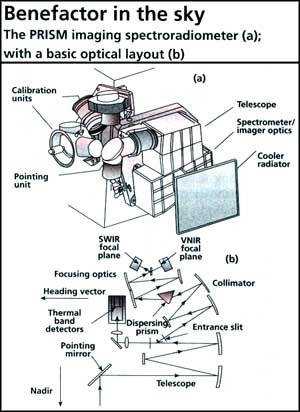 the satellite industry has come a long way from the first commercial launch of intelsat (also known as the Early Bird) on April 6, 1965. Research and development work in a large number of fields is relying heavily on the data being sent from various satellites orbiting the earth. The growing threat of a drastic ecological imbalance of the earth is making it imperative to design extremely powerful and discriminating observation satellites to monitor our endangered environment.

Sira, the electro-optical specialist company near London, is designing an ultra-sensitive instrument, a spectroradiometer for a 21st century European satellite that would enable scientists to monitor significant occurrences such as global warming, ozone depletion, pollution levels throughout the biosphere, health of crops, spread or retreat of deserts and the changing patterns of the world's weather.

The project is called Process Research by an Imaging Space Mission (prism) and several aerospace consortia have made competitive bids. Sira's partners on the instrumentation package design are Dornier Satellite Systems, Matra-Marcone Space and aea Technology -- all teamed under Daimler-Benz.

The specification that Sira has to meet is for an instrument having a high degree of accuracy and resolution. The radiance range must encompass normal land brightness and temperature ranges and accuracy within two per cent for spectral imaging and one degree for temperature readings. An especially demanding aspect of the specification is a need for the instrument to be capable of not only viewing vertically downwards but also out to a distance of 400 km on either side and 700 km forward along its track and 400 km backwards at the terrain it has just passed over.

Dan Lobb, a senior scientist at Sira, is well aware of the difficulties of the task facing his Chislehurst-based team, about 12 miles from London. "The first challenge is the two axis pointing capability, although that may be solved by rotation of the whole satellite. If it isn't, it comes back to us to devise a separate mirror system. This is a new requirement and not something that other instruments have done. I think this is probably the first time anyone has tried to do this for an earth observing instrument."

It is planned that the prism satellite will circle the earth in a polar orbit, taking 100 days to complete one revolution, while beneath it, the entire area of the continents and oceans is surveyed at three-day intervals. The satellite will provide a very comprehensive, automatically-updated status report on the physical conditions of the earth. The exhaustive data sent by it will be useful to researchers in diverse fields to easily locate places where natural resources are in abundance and where conditions for life are or will be adversely affected.

For earth scientists and agriculturists, there will be data to aid in geological mapping, leading perhaps to mineral discoveries, a better understanding of irrigation problems, or more effective compromises between conservation and the demands of agriculture.

The fast deteriorating state of the atmosphere, presence of harmful gases in dangerously high percentages, the amount of trace gases, pollution of waterways and the coastal regions -- will all be constantly monitored by prism. Receptors recording the thermal infrared bands will tell scientists what the temperatures are on the land surface, on the cloud tops, and in the surface waters of the oceans, so that any degree of overall global warming can be constantly checked and regional temperature augmentation detected.

As the satellite will be in the polar orbit, it will be able to send information as to whether ozone depletion is occurring over the poles. prism would be more precise because of its polar orbit as data from a satellite in the equatorial orbit is not very accurate.