Satellite data to help predict regions that risk having wildfires 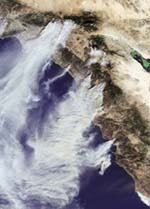 satellite data may soon allow scientists to predict regions that face the risk of wildfires. A study shows that the data can track wildfire before it strikes. Earlier, scientists used satellite observations to find out the exact location of wildfires besides monitoring their movement. The paper was published in the Journal of Geophysical Research Biogeoscience (Vol 111).

By studying shrublands prone to wildfire in southern California, usa, scientists from the University of California, Santa Barbara, came out with two key indicators plant moisture and fuel condition of the amount of living plant material in an area. The study revealed that the nasa satellites could detect plant moisture and the ratio of dead to live material to provide data on potential areas at risk.

Moisture levels and fuel condition, combined with weather conditions, play a major role in the development, rate of spread, and intensity of wildfires. "Wildfires tend to be extreme when live fuel moisture is low. When live fuel moisture is high and green live plant material abundant, they don't start as easily, do not spread as fast and are less hot," said lead author Dar Roberts.

Importance of moisture conditions in the development of wildfire was established long back but this research says that there are other significant factors as well. "Even if vegetation is extremely dry, there are other factors that influence whether a fire will develop and how quickly it spreads, including the ratio of live to dead foliage, plant type, seasonal precipitation, and weather conditions," said Roberts. "In southern California, if a strong Santa Ana (hot and dusty winds that blow westward toward coastal areas) occurs before the first major rainfall in the fall or winter, the risk for wildfire is heightened."

To verify the accuracy of satellite data, the researchers compared these with ground-based data. "We found that the space-based data were closely linked to the field measurements, suggesting the instruments can be used to determine when conditions are favourable for wildfires," said Roberts.

"Unlike in India, forests in North America have high fuel load. A good example of a natural start common to some parts of the us is lightning. The satellite data can help restrict or defuse wildfire altogether," said Rajeev Semwal, ecologist with lead India. But there are limitations as well.

The satellite data worked best on landscapes with just one major plant type. "When you have mixed vegetation, it will be difficult to estimate live fuel moisture from remotely sensed data," said Roberts.

But Roberts clarifies that improving the role of satellite data in wildfire prediction and monitoring using satellite data is critical, since traditional field sampling is limited by high costs, and the number and frequency of sites that can be sampled.