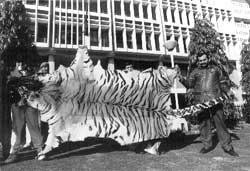 the Union minister for environment and forests, Saifuddin Soz, has sought support from developed countries and non-governmental organisations for strengthening the on-going conservation efforts in the country. Speaking at the Third General Assembly of the Asian Conservation Alliance, he cautioned that human greed can always devise ingenious methods for poaching and smuggling of endangered species. Such markets are flourishing across the border and in the developed world.

Several wildlife experts from Japan, Thailand, Russia, Taiwan, South Korea and India attended the meet. They discussed ways to stop illegal trade, parti-cularly in tiger parts, ivory, rhino and bear bile. Almost all the illegal wildlife trade in India -- including trade in tiger parts, ivory, musk and bear bile -- is destined for use outside India's borders where traditional oriental medicine, and the use of wildlife products is still widespread, said Belinda Wright, member of the Wildlife Protection Society of India.