At a recently-held wildlife meet in Cape Town, delegates draft an action plan to conserve migratory species of wild animals 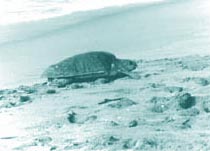 while climate change negotiations hogged media reports in international environmental negotiations, another global meeting in the same month quietly held its own and bore many fruitful results for its participants. On its 20th anniversary, the sixth conference of parties ( cop -6) to the Convention on Migratory Species of Wild Animals ( cms ) held in Cape Town, South Africa, from November 10-16, participants discussed ways to maintain cms ' sudden spurt in activities. Not only have the number of agreements under the convention increased, but membership has also grown. The convention currently has 65 members.

During the course of the discussions, delegates drafted a wildlife conservation plan, which has four key objectives -- to promote the conservation of species through both official and unofficial agreements; prioritise conservation measures through channels such as scientific research; extend global membership of cms to at least 85 countries by the end of 2002; and improve cms implementation by means such as increased funding and strengthening links with organisations involved in similar issues.

The meeting also highlighted key shortcomings of the convention, one of them being the issue of equitable representation in its membership. As of now, majority of its members are from Africa and Europe. Delegates emphasised the need to involve countries in Asia and the Americas as well.

Some delegates also highlighted the need to raise the convention's international profile and garner more political support. However, a few participants emphasised that cms is a scientific and not a political treaty. "Somehow they are happy not to be as controversial as Convention on International Trade in Endangered Species ( cites) . On the other hand, they would like to raise they profile," said Juan Ovejero of the Belgium-based Africa Resources Trust.

The convention -- also known as the Bonn convention after it was adopted in Bonn in 1979 -- came into force on November 1, 1983. It's primary objective is to protect migratory species (terrestrial, marine or avian) from overexploitation or change in habitat, throughout their range of migration. The convention provides a framework within which countries can protect and conserve migratory species.

However, in spite of these resolutions, the convention still has far to go. Some participants felt that cms requires more than dialogue to tackle the 'real' problems, especially on issues such as habitat destruction. "Habitat depends on how the land is used according to socio-economic considerations," explains Ovejero.

"The most competitive way of using land, especially in developing countries, is cattle, mining or agriculture... cms has a bio-centred approach that ignores all these issues and believes that by listing species and the countries banning its use (of migratory animals), species will recover. In the meanwhile, nobody deals with habitats, not even national governments."