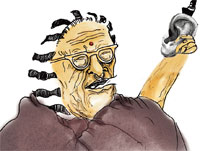 Gyani Maiya Sen, 75, has hit upon a unique way to preserve her language. The only surviving speaker of Kusunda—a language spoken in western Nepal—has been teaching it to a linguist for the past few months to preserve it for posterity. Sen’s son and daughter did not want to learn the language. According to the Times of India, “they did not want to be identified as Kusundas because the speakers of the language were nomads and usually looked down upon in Nepali society”.

About 70 years ago, the tribe dispersed to different parts of the country and stopped speaking in Kusunda even among themselves because of the stigma attached to the language, says Madhav Prasad Pokharel, professor of linguistics at Tribhuvan University, Kathmandu. Linguist Bhojraj Gautam says: “Earlier I got the feeling that Sen was embarrassed to speak Kusunda. But now she can speak for long.”