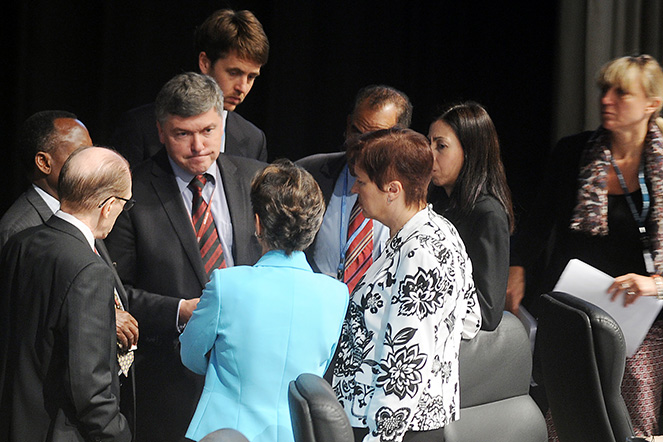 Following eight days of contentious debate and dilemma, and amid a highly tense and emotional gathering in the plenary, the session of the Subsidiary Body for Implementation (SBI) at the climate change conference in Bonn, Germany, was suspended on Tuesday. Parties will gather on Friday for closing the SBI session.

The meeting that began on June 3 aims to achieve a universal climate agreement by 2015 to come into force from 2020, and to find ways to increase the current inadequate level of global ambition to address human-generated climate change before the end of the decade.

Chair of the SBI, Tomas Chruszczow, acknowledged the lack of consensus to adopt his proposal. “There is no way to start the SBI’s work,” he said.

The agenda for the SBI could not be adopted as the Russian Federation is demanding exclusive discussions on procedural matters. They are unhappy about the treatment meted out to them during the Conference of the Parties (COP) in Doha in November 2012, where the President of the COP had gavelled through the decisions without addressing its concerns regarding the second commitment period of the Kyoto Protocol.

Voices in the corridor say this is the first time an entire session has gone without adopting an agenda.

This means, SBI will reopen afresh at COP 19 in Warsaw, Poland, and will have to adopt a fresh agenda. Crucial issues such as loss and damage and the review for the period 2013-15 will not be opened until then under the SBI.

While some parties are sad and frustrated, the implications and jitters this event sends out has gotten many rethinking and re-evaluating future COP outcomes.