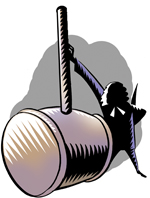 It seems you open your mouth at your peril when the judiciary is involved. Four journalists of the Delhi tabloid Mid-day discovered this after pointing fingers at the former chief justice of India, Y K Sabharwal. The Delhi High Court sentenced them to four months in jail. The Supreme Court has, however, stayed the sentences in the contempt of court case.

The charge against Sabharwal is that his sons operated a business out of the chief justice's official residence. He is also charged with hearing the Delhi sealing case at the same time his sons had got into a partnership with mall developers. It's a charge Sabharwal vehemently denies.

But many lawyers and citizens are demanding an explanation from him. "If some kind of business was being run, however innocently from his house, then this falls within public domain," says Rajeev Dhawan, a senior advocate at the apex court.