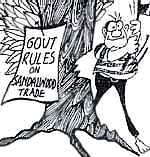 SANDALWOOD smuggling is raising quite a stink in Karnataka, where poacher-smuggler Veerappan has reportedly recruited three retired army personnel and a former BSF jawan to train other gang members in planting mines and staging ambushes. The four, whose identities are still secret, are supposed to have been paid Rs 4.5 lakh by Veerappan to join his gang. They are reported to be responsible for laying landmines near M M Hills and ambushing Mysore superintendent of police Harikrishna and six other policemen. News of Veerappan's latest exploits came from the recent arrest and interrogation of a close associate, Periannan.

Sandalwood smuggling in Karnataka and Tamil Nadu, the two main producers of sandalwood in India, is flourishing mainly because of elaborate rules and procedures for storing, selling and processing sandalwood. As adjoining Kerala has no such laws, it has led to large-scale smuggling across the Tamil Nadu and Karnataka borders to meet the growing demand for sandalwood. Unnecessary export curbs are also adding fuel to fire. Recently, both Karnataka and Tamil Nadu petitioned for relaxation of sandalwood export restrictions. At present, free export is allowed only of sandalwood handicrafts and machine-made finished products. Sandalwood production also has fallen according to forest departments of both states because of deforestation, spike disease, sparse growth, forest fires and unrestricted cattle grazing.