The genome sequence of Golden Delicious apple, the fourth most economically important fruit crop in the world, is now available. The sequence shows that large lengths of apple chromosomes are repeated and could be the reason the fruit is different from others in the family. Apple genome has 17 chromosomes while others like peach and strawberry have half the number.

The genetic map would help identify genes that provide desirable characteristics to the fruit and help breeders improve taste and protect the plant from diseases. The research also revealed that that the ancestor of the modern domesticated apple is Malus sieversii, native to the mountains of southern Kazakhstan. 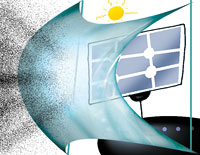 Solar panels can be kept free from dust using a self-cleaning system developed for NASA’s Mars rover robots. The technology involves depositing transparent, electrically sensitive material on the panels. The material pushes dust back into the air when sensors detect that concentrations on the panel’s surface are in critical levels.

Presented at the National Meeting of the American Chemical Society, August

New-age lithium batteries fitted in electric vehicles are more greener than believed earlier. Life cycle study of the new battery shows it causes 15 per cent of the total pollution in the vehicles, less than previous assumptions. The cost to the environment depends more on the kind of energy used to charge the battery. If coal is used the burden increases by 13.4 per cent.

The solar system could be up to two million years older than previously thought. Analysis of a meteorite found in the Sahara desert has indicated that the solar system is at least 4.5682 billion years old. By using a technique known as lead-lead dating, scientists calculated the age of a calcium and aluminumrich inclusion within the meteorite.

Inclusions are the first solids to form during the birth of the solar system. The revision is significant since the solar system is shaped within the first 10 million years of its formation. It can be deduced that solar system originated from supernovae and there was twice the amount of an iron isotope present in it.

Botanists claim to have found a new form of chlorophyll which can absorb more near-infrared light. It is one of the reddest forms of chlorophyll discovered and researchers say it could lead to new bio-energy applications in the future. It could be harnessed to help solar cells convert light into electricity.

Chlorophyll is needed for photosynthesis in plants and helps convert light into chemical energy.The new pigment dubbed Chlorophyll f has a different chemical composition. Extracted from cultures of cyanobacteria and other oxygenic microorganisms chlorophyll f, may allow certain photosynthetic life forms to harvest energy from wavelengths of light that many of their competitors cannot use.

HEALTH
Another reason to exercise 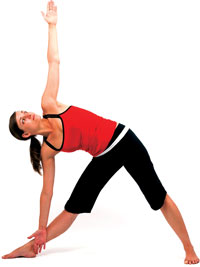 Another good reason to exercise. It not only helps you shed extra kilos by burning calories but also makes you feel full by triggering neurons in the brain. Brazilian researchers have found that besides burning calories, exercise restores the sensitivity of neurons involved in the control of satiety.

This leads to reduced food intake and consequently weight loss. They found when people consume diet rich in fat then the neurons fail to transmit signals leading to obesity. 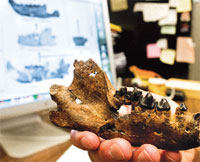 Carnivorous mammals shrank in size during a global warming event 55 million years ago, a study has suggested. It also traces the evolution of a new species Palaeonictis wingi, half the size of its ancestors during this period.

The hyena-like animal evolved from the size of a bear to the size of a coyote during a 200,000-year period when Earth’s average temperature increased about 15 degrees Fahrenheit. Evolutionary biologists believe increased levels of carbon dioxide and a drier environment may have lead to shrinking of size of the animals. 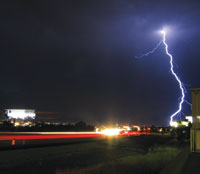 Powering homes with electricity collected from the air may soon become a reality with a technology that could capture electrical energy from air. This energy otherwise would manifest itself as lightening. This hygroelectricity is formed when water vapour collects on dust particles. So far, it was believed water vapour does not carry a charge.

Presented at the National meeting of American Chemical Society, August 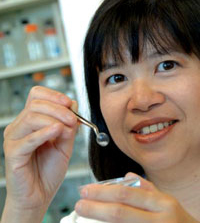 HEALTH
A new pair of eyes

Biosynthetic corneas can help regenerate and repair damaged eye tissue in humans. Researchers from Ottawa University in Canada and Sweden’s Linkoping University grew a synthetic form of human collagen in the lab and moulded it into wafer-thin button shapes to create artificial corneas.

They coaxed eye’s own natural cornea cells and nerves to grow back using collagen as a scaffold. The artificially fabricated cornea integrate with human eye easily. The rejection rate of the corneas is also low in comparison to corneal grafts and can help restore sight in millions of people waiting for a donated human cornea for transplantation.

The US Geological Survey and NASA scientists have found that the global distribution of mangrove forests has reduced considerably. Satellite imagery shows only 137762 square kilometres of forests exist. The numbers are 12.3 per cent less than the recorded mangroves cover till date. Seventy-five per cent of the remaining forest is now found in 15 countries.