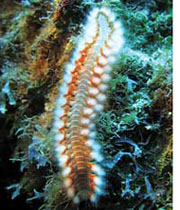 The mystery behind the underwater display of natural glow, seen by sailors time and again, has been solved. It is the bioluminescent marine fireworm that secretes a mucous which gives out a green glow to attract mates and ward off predators. Reported in the March issue of Invertebrate Biology, the study provides insights into how the fireworm functions and brings scientists closer to isolating the protein responsible for the mechanism. This find has applications in biomedical and related fields.

Under extremely high pressure, sodium--an excellent conductor--turns into a transparent insulator. Micromillimetre-sized samples of sodium were subjected to a pressure of two million atmospheres.The overlapping of sodium atoms forced the outer electrons to go into spaces between the atoms. This led to a collapse of its metallic state while its colour changed from black to red to transparent. This find defies existing knowledge that says under high pressures an element goes metallic. The findings, published in the March 12 issue of Nature, will help understand the properties of highly compressed matter found in stars and giant planets.

Sepsis, a condition in which the body attacks its own organs in response to a microbial infection, kills 1,400 people worldwide everyday. The microbes are difficult to eliminate. Scientists have found a way to pull them out from blood with a magnet. Tiny magnetic beads coated with antibodies are added to a patient's blood. The beads attach themselves to the microbes. The blood is run through a system in which two liquid streams flow side by side. One contains the blood and the other a saline-based collection fluid. As the blood flows, a large magnet placed near the tubes, pulls out the micro-magnets from the blood into the other fluid. The collection fluid is discarded and the cleansed blood flows back into the patient. The study was published in the April 13 issue of Lab on a Chip. When tested, the method removed 80 per cent pathogens from contaminated blood in a single pass.

Seventy-two proteins that go into making the saliva of the black fly, a blood sucker, have been identified. This saliva disarms the host's body and prevents inflammatory reactions. Black flies are vectors of arboviruses and the worm that causes river blindness, a devastating eye disease. The findings. released in the January 23 issue of the Journal of Proteome Research, could help in developing drugs against diseases transmitted by the black fly. 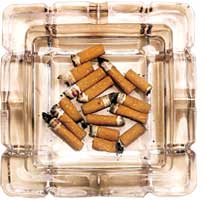 While studying the effects of nicotine on the mammalian nervous system, scientists found the neuro-receptors have a broader role than was imagined. The alpha-7 nicotinic acetylcholine receptor in mice brain was studied. Acetylcholine is a neurotransmitter released by the nervous system to activate the receptor during nicotine intake. Other than nicotine, 55 proteins, including the G alpha protein, were found to bind to the receptor. Drug makers target receptors that G alpha protein binds to. This makes the nicotine receptor a potential target. Humans, too, have this receptor. This was reported in April in the Journal of Proteome Research.

The earth's crust heats up faster than was known. Researchers used laser-based techniques to determine how long rocks take to conduct heat. The conductivity decreased with increasing temperatures. In other words, the rocks heated up fast and stayed hot longer. The findings were applied to models simulating tectonic plate movement during mountain belt formations and continental collisions. These events produced heat that triggered the melting of the crust. Earlier it was believed that only molten magma from the earth's mantle could cause melting of the crust but during continental collisions there is no inflow of magma. Published in the March 19 issue of Nature, the study will help scientists figure out the processes that occur during mountain formations and continental collisions. 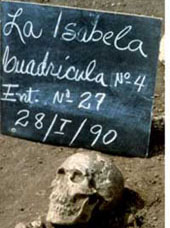 Science took archaeology to new heights with chemical analysis of teeth of members of Christopher Columbus' crew to establish the earliest visitors to the New World. Human remains from the island of Hispaniola where Columbus established a colony after his second voyage to America in 1493-94 were excavated two decades ago. The analyses of teeth samples showed the first visitors had profiles that indicated old world origin. For example, the diet appeared to be of heavy grasses like millets or maize, consumed either in America or Africa, not Europe. This suggested Africans might have travelled to the New World much before there are records of them brought over as slaves. The study was published in the March 20 issue of Science.