This could pave the way for new generation of anti-histamine drugs that are effective against allergies and do not have side-effects. Scientists have deciphered the complex three dimensional structure of the human histamine H1 receptor protein. Histamine triggers itching, rashes or swelling in one out of every four persons who suffer hayfever or other allergic reactions to food or pets. Nature, June 22

The dawn of agriculture 10,000 years ago made people shorter and unhealthy. A first of its kind review of health and height statistics from the days when agriculture began across the world found that people in farming cultures experienced nutritional deficiencies. It happened because people had harder time adapting to food crops.Till now, it was believed the rise of agriculture led to a more stable food source making one healthier. Economics and Human Biology, June 16

Phycology
Let there be sunlight

Golden algae (Prymnesium parvum) have been responsible for the death of more than a million fish in Lake Whitney in Texas, usa. The algae produces its own toxins, can swim and photosynthesise.

Environmental factors have been known to influence toxin production. Now it has been found that sunlight reduces the toxicity of golden algae. The study found the longer golden algae toxins are exposed to natural sunlight, the less toxic they become to fish and other aquatic organisms. It is believed that large golden algae blooms attack the fishes’ gills and suffocate them. Journal of Plankton Research, June 15

The sun’s activity hit a historic low in 2008. This caused a drop in magnetic effects on the earth—with an eight-month lag—a study found. It suggests that many magnetic changes on the earth are strongly linked to the solar activity cycle, though not in perfect synchrony.

Scientists say three things help know the amount of energy transferred from the sun to the earth’s magnetosphere—the solar wind speed, the strength of the magnetic field outside the earth and the direction this field points. The scientists found that the magnetic field was extraordinarily low in 2008 and 2009. The solar wind speed showed a steady decline consistent with the timing of the decline in geomagnetic effects. Annales Geophysicae, May 16

Carbon-14 has long been used to determine the age of objects. There is something different about the isotope. In comparison to other isotopes, carbon-14 takes about three billion times longer to decay. But no one knows why? Now physicists have solved the mystery. They say it all depends on strong three-nucleon forces (a nucleon is either a neutron or a proton) within each carbon nucleus. Under normal conditions, the decay of radioactive isotopes is controlled by the interaction between forces of two nucleons. But in the structure of carbon-14 those force interactions constantly turn into three-nucleon force interaction and this cancels the decay effect. Physical Review Letters, May 26 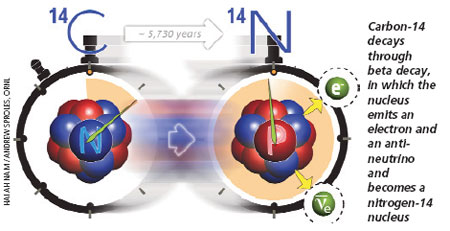 Root hair help plants absorb essential nutrients and water from the soil. Now botanists have shown how components of the cell wall regulate the growth of root hair. This will help improve agriculture, horticulture and forestry. To study the root hair growth the botanists target ed genes involved in the production of wall glycoproteins in the plant Arabidopsis. They identified three groups of genes required for assembly of the cell wall glycoprotein, extensin. When the genes were prevented from functioning, the root hair were stunted. Science, June 17

Asbestos is a known carcinogen. Now scientists have found what links it to cancer. They found that asbestos present in the environment causes increase in frequency of somatic mutations. Wild mice from two locations in Israel, one having much higher asbestos levels in the environment than the other, were studied for genetic mutations in six dna sites. Mice from the asbestos-polluted region showed higher levels of mutations. This increased frequency of genetic mutations raises the chances of cancer. Environmental Science and Pollution Research, June 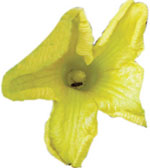 Ever thought what makes food nutritious? Scientists have found that bees and animal-pollinated crops contain the majority of the available dietary lipid, vitamin A, C and E, and a large portion of the minerals calcium, fluoride, and iron worldwide. The team showed that in the global crop supply, several key vitamins and other nutrients that can lower the risk of cancer and heart disease are present predominantly in crops propagated by pollinators. These include the carotenoids lycopene and ß-cryptoxanthin, which are found in brightly coloured red, orange and yellow fruits and vegetables. PLoS One, June 22

Zoology
Where do they live?

Scientists have mapped the patterns of species richness in India for primates, carnivores and herbivores. They found the average estimated richness was 7.2 out of 10. Protected areas supported higher richness, but forest cover did not (exceptions were herbivores). Species richness decreased with increasing elevation and human densities. Species richness patterns also varied across taxonomic groups. Accounting for individual species differences is important in selection of priority conservation areas in India. Current Science, June 25 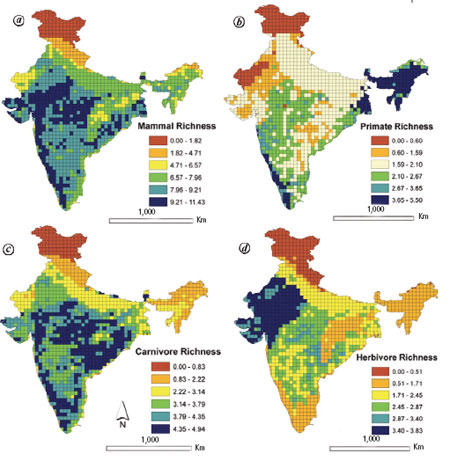