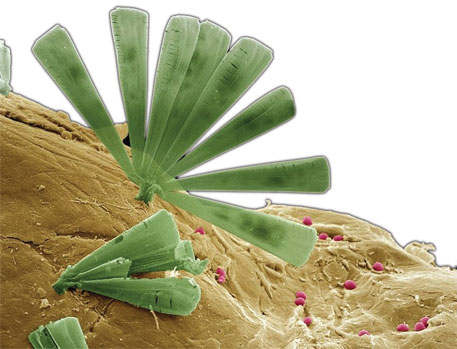 Microbes that grow on plastic floating in oceans degrade them

MICROORGANISMS WHICH dwell on millions of tonnes of plastic pieces floating in oceans are turning out to be a huge help in cleaning the ocean surface. They not only break down the pollutant by eating it, but also make it sink. Analysis of over 1,000 images of plastic material drifting along Australian coastline has shown that diatom was the most common algae which kept on collecting on plastic pieces till they sank. There could be other complex creatures which feed on microbes and toxins. The observations can help explain why plastic pollution on ocean surfaces is not growing at the rate scientists feared it would. It could also give clues to new and improved waste disposal mechanisms on land.

Aircraft CAN significantly reduce their role in global warming by choosing the correct flight route. When an aircraft passes through a region in the sky where the air is extremely cold and moist, a condensation trail (contrail) gets formed and stays for hours. Like normal clouds, contrails prevent heat from escaping the planet. Such cold and moist air in the sky is found around high pressure systems. If aircraft can avoid such regions, they can prevent formation of contrail. Studies have shown that global warming caused by contrails could be as large as that caused by carbon dioxide emissions from aircraft.

The STRENGTHof a material decreases with its density. But it is possible to construct a super strong structure using a material of very low density by arranging vertical, diagonal and horizontal beams in a way that the weight load gets distributed. This geometric concept has been known for decades, but it is for the first time actual models of polymer, ceramic and metals have been created which are unusually strong for their densities. The design could be used for constructing structures deployed in the space as carrying heavy load increases the cost of the launch. Science, June 20