Bytes
Another reason to quit tobacco

Risk of HPV16 infection higher among people who consume tobacco 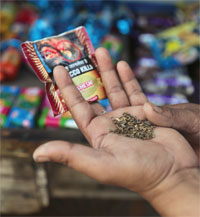 NEW RESEARCH has indicated a possible link between tobacco use and infection with oral human papillomavirus (HPV) type 16. This is a sexually transmitted virus that causes cancers of mouth and throat. The study examined 6,887 people in the United States and looked for HPV16 infection among those who tested positive for tobacco-related chemicals in their blood and urine samples. The virus was detected from a 30-second oral rinse and gargle that collected mouth and throat cells. It was found that people who had higher levels of tobacco compounds in their body were more likely to be infected with HPV16. Although the exact reason is not known, researchers suspect that the virus may not be cleared easily from the body of those who use tobacco. JAMA, October 8

Air POLLUTION can lead to increase in the water flowing through rivers. Pollutants known as aerosols reduce the amount of sunlight reaching the Earth's atmosphere. This reduces evaporation, thus increasing river flow. During the 1980s, river flow in the central European river basin went up by 25 per cent when aerosol levels in the region were at their peak. The study might help in dealing with water shortage, which is likely to be one of the biggest impacts of climate change.

Sandwiches ACCOUNT for one-fifth of the daily sodium intake by American adults. A new study finds that on any given day, 49 per cent of adults eat at least one sandwich. These people had higher sodium intake—600 milligrams per day more—than non-sandwich eaters.

They were also found to have higher intake of calories. An American adult who ate a sandwich consumed around 300 kilocalories more than those who did not include sandwich in their diet. Journal of the Academy of Nutrition and Dietetics, October 5 (Online)