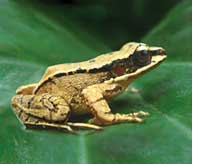 biological sciences
Frog, out of the well

The frog, Odorrana tormota, is the only animal that can manipulate its hearing system to select particular frequencies. It helps the males to call and woo females. The system in frogs is also being used as a model for hearing aids. The rare amphibian may have evolved its hearing talent out of necessity, since its environment is so noisy, said researchers of University of Illinois at Urbana Champaign. Frogs sing like a bird or emit high ultrasonic sounds, the study said. The researchers added that the since the frog's eardrums are transparent, it wasn't too difficult to figure out the feat. The scientists used a laser to measure the eardrum's vibration and noticed that while it could respond to audible and ultrasonic sounds, sometimes the eardrum's sensitivity to ultrasonic noise disappeared.This is because the frog actively opens and closes the Eustachian tubes (two narrow channels), which connect the pharynx (part of the neck and throat) to the left and right middle ears. When open, the tubes couple the frog's left and right ears, making them sensitive to sounds from all directions. When closed, they can pick up ultrasonic frequencies.

The world's wetlands could release a carbon bomb if they are destroyed, scientists said at a conference linking wetlands and global warming in Brazil. Wetlands include marshes, peat bogs, river deltas, mangroves, tundra, lagoons and river flood plains, besides swamps. Together they account for 6 per cent of Earth's land surface and store 20 per cent of its carbon. They also produce 25 per cent of the world's food, purify water, recharge aquifers and act as buffers against violent coastal storms. If all the wetlands released carbon, it would contribute significantly to the greenhouse effect. Water from wetlands may evaporate and rising sea levels could completely inundate them. Even so, the scientists said wetland rehabilitation was a viable alternative to artificial flood control for coping with the larger, more frequent floods and severe storms forecast for a warmer world.

Massachusetts Institute of Technology's (mit) scientists have devised an efficient and practical solar power device using sheets of glass covered with organic dyes. They say this clean and renewable energy source is more affordable and the device "may provide a better way to extract energy from the sun". Solar power so far has proven costlier than standard energy sources. mit scientists used glass sheets coated in organic dyes to concentrate light hitting the panes. The dyes absorbed the light, emitted it into the glass, which carried the light to the edges of the pane much as fibre-optic cables transport light over distances. At the edges of the glass are located small solar cells that then transform the light into electricity. Existing solar concentrators use mirrors or lenses to concentrate the light.

Australia's endangered Tasmanian Devil, a carnivorous mammal about the size of a small stocky muscular dog, is mating earlier to beat extinction, scientists have found. A disfiguring facial cancer, which kills within months, had cut down the devil's population by 60 per cent and it was believed that it would become extinct in 10-20 years. But the scientists said that their study was the first known case of infectious disease leading to increased early reproduction in a mammal.

An anti-freeze protein in the Canadian snow flea could help increase the storage life of donor organs, report scientists in Illinois and Pennsylvania, usa. The protein helps the flea to survive frigid winter temperatures in Canada. The scientists produced a first-of-its-kind protein in the laboratory that could find use in extending the storage life of donor organs and tissues for human transplantation. They also produced variants of the synthetic protein, including one form of mirror image of the natural protein. The mirror-image form appeared less likely to trigger harmful antibodies and more resistant to destruction by natural enzymes, making it potentially more effective in organ and tissue preservation. 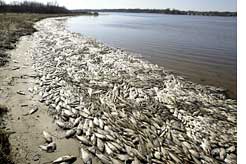 Nitrogen control, used to check cultural eutrophication--addition of nutrients to a water body due to human activity that causes huge algal blooms, fish kills in lakes--may actually increase the problem. Researchers of University of Alberta revealed this after completing one of the longest running experiments (for 37 years) ever done on a lake in Ontario, Canada. To find out whether controlling nitrogen inputs could control eutrophication, the researchers added constant amounts of phosphorus and decreasing amounts of nitrogen to the lake. The results showed that reducing nitrogen inputs increasingly favoured the growth of nitrogen-fixing cyanobacteria. This nitrogen fixation was sufficient to allow biomass to continue to be produced in proportion to phosphorus, and the lake remained highly eutrophic. The researchers suggest that to reduce eutrophication, the focus of management must be on decreasing inputs of phosphorus. They contend that eutrophication can become a health-related problem in humans once it begins to interfere with drinking water treatment.