ARTIFICIAL LIGHT can affect the growth and flowering of plants and even the number of insects dependent on them for food. Researchers simulated street lighting on artificial grassland plots containing pea aphids, sap-sucking insects, at night. These were exposed to two different types of light—a white light similar to newer commercial LED lights and an amber light similar to sodium street lamps popular in the streets of the UK. The low-intensity amber light was shown to inhibit, rather than induce, flowering in greater bird's foot trefoil, a wild plant of the pea family and a source of food for the pea aphid in grasslands. The number of aphids was also significantly suppressed under the light treatment due to the limited amount of food available. This shows that light pollution can have a permanent adverse impact on wildlife and ecosystem. Philosophical Transactions of the Royal Society B, March 16

Warming TEMPERATURES are shrinking ponds in the Arctic tundra. Rise in temperature thaws nutrient-rich permafrost, releasing nutrients into ponds and enhancing plant growth, which takes over shallow ponds. More than 2,800 ponds in the northern region of Alaska's Barrow Peninsula were analysedwith photos and satellite images between 1948 and 2010. The number of ponds had decreased by 17 per cent, while pond size had shrunk by an average of one-third. Journal of Geophysical Research: Biogeosciences, March 12 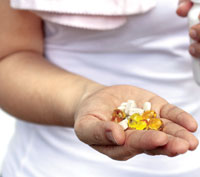 Adults WITH hypertension can reduce the risk of heart attack by taking folic acid supplements along with the prescribed medication, enalapril. More than 20,000 adults with high blood pressure but without a history of stroke in China were given a daily treatment of a single-pill combination of enalapril and folic acid or a tablet containing enalapril alone. The first stroke occurred in 282 participants in the enalapril-folic acid group compared to 355 participants in the enalapril group. This represents a 21 per cent reduction in the risk of first stroke. JAMA, March 15

The LEVEL of oxygen in water affects certain species of fish. Deep waters of the West Coast, US, are low on oxygen. Fish species such as spotted ratfish and petrale sole are most sensitive and their presence has been found to decline sharply in the West Coast, while greenstriped rockfish and dover remain unaffected by dissolved oxygen levels. Such co-relation can affect the marine chain by driving fish into habitats that are less desirable for fishing. Fisheries Oceanography, March 11