White-nose syndrome has devastated the populations of bat species in northeast US since 2006. The fungus that causes the disease has now spread south and west to 16 states and parts of Canada. It has killed over a million bats till date. A group of researchers warn the declining bat population could affect agriculture.

They studied what bats ate in the cottongrowing areas of Texas and calculated that American farmers save around US $3.7 billion a year in pest-control costs through them. If the deaths continue unabated, they warn, it would result in increased use of pesticides, hence high input costs.
Science, April 1

Indium tin oxide is an important material for displays in TV sets, telephones and laptops. The problem with it is that it is a rare metal and its supplies could run out in 10 years. This prompted the researchers to search for alternatives. Now they have found one.

The replacement is a transparent, conducting film produced in water, based on electricity conducting carbon nanotubes and plastic nanop articles. Unlike its predecessor it is environment- friendly. The materials are water based, and no heavy metals such as tin are used.
Nature Nanotechnology, April 10 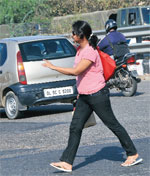 Delhiites now breathe a cleaner air. An analysis of the first remote sensing imagery on air pollution levels done by NASA has found that the quality of air that the residents breathe has improved over the years. It is due to stringent regulations like limiting diesel trucks during working hours and closing polluting industries in residential areas. The researchers also conducted a respiratory health survey of 3,989 residents.

HEALTH
Twist in the wrist

Next time you want to know how vulnerable your child is to heart disease, do not rush to a doctor. Instead see his wrist. Overweight children with larger wrist bone size have higher insulin resistance, a risk factor for heart disease. 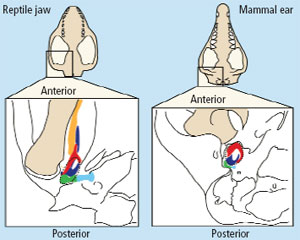 Since Darwin’s time, scientists believed the middle ear bones of mammals evolved from the jaw bones of reptiles, but there was no evidence. Now a fossil of an extinct species of mammal has confirmed this.

The lower jaw of reptiles consists of several different bones while mammals have one (the tooth-bearing dentary)—rest have developed into the ossicles of the middle ear (the ectotympanic, malleus and incus).

The fossil clearly illustrates the transition. In it the lower-jaw elements have started to become the middle-ear ossicles.

The animal’s ectotympanic and malleus have lost contact with the dentary bone but are still connected to the lower jaw by a cartilage. The changes helped mammals hear better and a wide range of sounds.
Nature, April 14 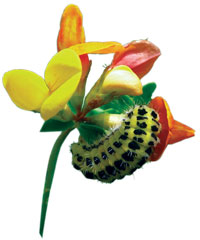 The discovery is the first example of how organisms from different kingdoms evolve the same biochemical processes. The researchers till date thought the caterpillars had stolen the genes for making cyanide from the plants.

But they fou nd moth and plant genes produce proteins that are similar in shape, but their gene sequences are different. The moth trinity is more related to similar genes in silkworms, while the plant ones have similarity to mustard cress.
Nature Communications, April 12 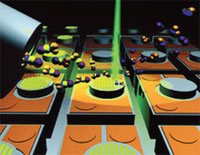 All long-distance, high-speed communications through optical fibres depend on lasers. Researchers have devised a way to produce 10 times more efficient lasers than the traditional ones. Two factors are important for optical communication: colour of the light governed by wavelength and orientation of the light governed by polarisation. To have their best combination, the team resized the laser and fitted a grating with nanometre sized holes in front of the light source. The transmission errors were also reduced.
Nanoscale, April 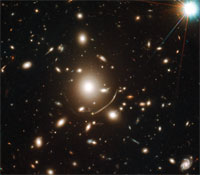 In the early years of the cosmos, a diffuse fog of neutral hydrogen gas blocked UV light in the universe. Some source of radiation mu st have progressively ionised the diffuse gas, clearing the fog to make it transparent to ultraviolet rays as it is today.
Journal of Royal Astronomical Society, April 12

Tired of opening and closing windows as temperature changes? Get ready for smart windows that reflect heat from the sun on hot summer days but let it in when it is colder.

Scientists have found a unique class of synthetic chemical compounds that are transparent to infrared light at lower temperatures, but undergo a phase transition to begin reflecting infrared when they heat up beyond a certain point. They also managed to manipulate the transition temperature for vanadium oxide, one such material. By preparing vanadium oxide as a nanomaterial instead of in bulk, the scientists managed to lower the compound’s trigger point from 67°C to 32°C. It can pave the way for energy-saving windows.
Journal of Physical Chemistry Letters, April 7

India can lose up to four per cent of its agricultural land due to climate change. Scientists concluded this after studying worldwide changes in soil temperature and humidity using international land and climate datasets and remote-sensing land-use maps.

They say regions with relative high latitudes, Russia, China and the US, may see an increase of total arable land by 37–67 per cent, 22–36 per cent and 4–17 per cent respectively. Tropical and sub-tropical regions like South America, Europe and Africa may lose it. This can affect food availability and prices.
Environmental Research Letters, March 18 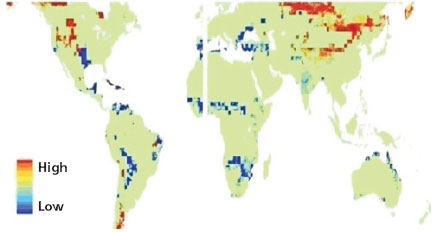