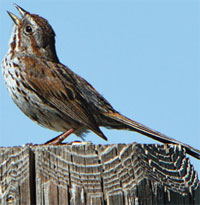 Sparrows and blackbirds are known to sing at a higher pitch in urban environments to escape low-frequency city noise of traffic and human activities. A new research suggests that high-frequency chirping also helps the city birds penetrate the architectural design of cities, making communication easier. A group of researchers, who used sound recordings, claims high notes do not produce many echoes on their way through the various surfaces of the city landscape. That way, the sound is clearer when it reaches its destination, say the researchers. PLoS One, December 12 (2011) 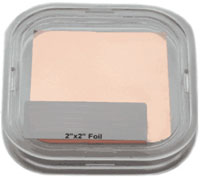 Wonders of graphene just don’t cease. Scientists in the US say the ultra-strong material, made from bonded carbon atoms, can also be used as an effective anti-corrosion coating. 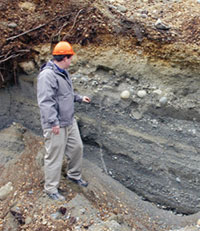 Mining of oil sands in Canada accounts for as much pollution as a mid-size city, say researchers. Using satellite remote sensing observations, the Canadian team found high levels of sulfur dioxide and nitrogen dioxide across an area of 1,500 sq km around the mines. The air pollutants can lead to acid rain.

Oil sands are deposits of sand, clay and water saturated with bitumen, a viscous oil. They are mined and processed to extract bitumen, an energy intensive exercise, which is then refined and diluted to turn it into oil. About two tonnes of the sands are required to produce one barrel of oil (159 litres). The sands contribute to 40 per cent of Canada’s oil production. Geophysical Research Letters, February 22

The moon, thought to be geologically cold and dead, is still being pulled apart. Images from a NASA spacecraft show 50-metre-wide and 20-metre-deep trough-like features called graben on its surface. Such stretching causes the near-surface materials to break along two parallel normal faults. 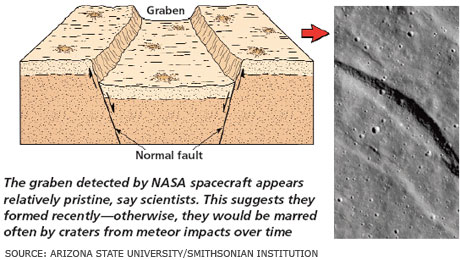 The area between the faults slides down, forming a valley. The cause of the geologic activity remains uncertain. The activity occurred less than 50 million years ago, which is considered recent compared to the Moon’s age of more than 4.5 billion years, say scientists who add the findings cast doubts on how the moon evolved. Nature Geoscience, March

Everyone has different ways of dealing with stress. Some indulge in binge eating, some exercise. Elephants abandon their home for a long time. Between 2000 and 2006, researchers from University of Missouri in the US measured levels of metabolites of glucocorticoid hormones, which are associated with physiological stress, and land use patterns for three different elephant populations in Africa. They found that the populations with chronic stress used 20-43 per cent less of their habitat. They generally selected forest and woodland habitats over grasslands. Chronic stress and refuge behaviour could be linked to management problems, like habitat destruction, says lead researcher. PLoS ONE, February 22

Re-heating sunflower and flaxseed oils could put one at a greater risk of cancer and neurodegenerative diseases like Alzheimer’s than olive oil, says a study. It is known that at frying temperature oil releases toxic compounds called aldehydes. In the study, researchers studied three types of oil—sunflower, flaxseed and olive. Each oil was heated at 190°C for 40 hours. Sunflower and flaxseed oil created the most toxic aldehydes in less time. These oils are high in polyunsaturated fats. Adversely, olive oil, which has a higher concentration of monounsaturated fats, generated the compounds in a smaller amount and later. Food Chemistry, April 1

People who take sleeping pills twice a month are at four-fold risk of dying prematurely, says a US study. Researchers tracked the survival of over 10,500 people who were prescribed a range of sleeping pills for an average of 2.5 years between 2002 and 2007. The commonly prescribed drugs that may raise such risks included zolpidem (Ambien) and temazepam (Restoril). Up to 10 per cent of adults took sleeping pills in 2010. British Medical Journal Open, February 27

Since 2009 scientists have been suspecting the possibility of a black hole when they detected an unusual X-ray transient light source in Andromeda, a spiral galaxy 2.6 million light years from Earth. Now a team of astrophysicists has confirmed the presence of the black hole. The team says the bright object, Ultraluminous X-ray (ULX), is the result of a stellar black hole gorging on large amounts of matter. These black holes, formed by the collapse of stars, contain up to 20 times the mass of the Sun. They guzzle gas and dust to form an accretion disk that heats up and unleashes X-ray jets. The finding could help understand ULX sources and their origin. Astronomy and Astrophysics and Monthly Notices of the Royal Astronomical Society, February 24

From cosmetics to food products, nanoparticles have many useful applications. But they have a dark side too. Swedish researchers say plastic nanoparticles are transferred from algae to fish through zooplankton. This affects fish metabolism. During the 60-day experiment, the team constructed two food chains, one with and one without nanoparticles. The exposed fish moved slowly, hunted less and took twice as long to consume the same amount of food as the control fish. In the absence of food, the control fish used energy reserves, while the exposed fish were inhibited from using the reserves. The results could help investigate potential biological risks associated with plastic nanoparticles. PLoS ONE, February 22

Horticulture
From waste to bioelectricity

Whether it is coconut shells or mango seeds, about 31 million tonnes of endocarp (the innermost layer of the pericarp which surrounds a fruit seed) biomass is created every year, but most of it is thrown out since it is not suitable for eating or for reincorporating into soil. Endocarp biomass could contribute to bioelectricity requirement.