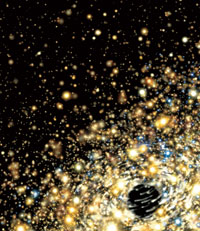 Astrophysicists have for long been puzzling over how the super massive black holes that lie at the heart of most galaxies attained their enormous size. Some theories say these galactic black holes —which seem to contain millions to billions of times the mass of our sun—got hefty by consuming huge quantities of gas or by merging with other black holes; others suggest the objects were simply born large.

It has now been found that the black holes get super massive by ripping apart double-star systems (pair of stars that are held together by gravitational attraction and revolve about their common center of mass) and devouring one of the stars. According to the new simulations, when a star pair strays too close to a galactic black hole, the two stars get pulled apart.

One member of the duo is captured while the other is chucked away at high speed in a gravitational slingshot. The study also found the our galaxy's super massive black hole has likely doubled to quadrupled in mass during the past five to 10 billion years by eating stars. The Astrophysical Journal Letters, April 2

Unlike insects, bats have heavy, muscular wings with hand-like bendable joints. The fact that they tuck in their wings on upstroke has made researchers curious. Now they have found a reason for it. Researchers say by flexing their wings inward towards their bodies on the upstroke, bats use only 65 per cent of the inertial energy they would expend if they kept their wings fully outstretched. The strategy could be used to design winged vehicles.
Proceedings of the Royal Society B, April 11

Whether it’s catalysts in fuel cells or electrodes in batteries, engineers always want metal films that are porous to make more surface area available for chemical reactions and achieve high conductivity. The latter has been something of a challenge. But chemists have now developed a way to make porous metal films with up to 1,000 times the electrical conductivity offered by previous methods. It has bonds made up of silicon compounds and metal ions. The bonds are spaced apart using nanostructures of carbon, silica and the metal to create pores. These structures can also be used for engineering and biomedical applications. Nature Materials, March 18

Conventional wisdom has it that oil floats on water. But now reverse is also possible. Researchers say the ability of water drops to float on the surface of an oil bath depends on the size of the droplet and the type of oil. They found that commercial vegetable oil has enough surface tension—the force between liquid molecules —at its interfaces to support a droplet’s weight.

The team tested the hypothesis by adding a droplet of water to canola oil and it stayed afloat. At the same time, they found that vegetable oil cannot support drops bigger than one hundredth of a cubic inch. The floating ability of water could be harnessed to speed the clean up of oil spills as both microbes and enough nutrients can be released through water droplets. Langmuir, March 13

Studies have so far ignored the impact of ocean acidification on evolution of organisms. It has now been found that Emiliania huxleyi, a calcifying plankton, exposed to acidic conditions four times higher than present levels grew faster. Five hundred asexual generations were assessed. The plankton also evolved bigger and survived even though the shells were not built quickly. Nature Geoscience, April 8 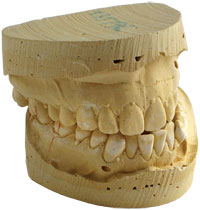 Suffering from teeth problems and getting regular dental X-rays done? Beware. You may be vulnerable to a common type of tumour—meningioma. It forms in the membrane around brain or spinal cord. Most of the time the tumours are benign but they can be fatal. Researchers found that people who have a yearly bitewing test done are 1.4 to 1.9 times more likely to have the tumour due to exposure to ionising radiations. The examination involves an X-ray film being held in place by a tab between the teeth. Moreover, people who get a yearly panorex examination—an X-ray taken outside the mouth which shows all the teeth on one film—are three times more vulnerable to cancer. Cancer, April 10 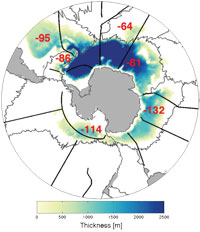 The coldest deep ocean water that flows around Antarctica in the Southern Ocean has been disappearing over the past few decades. This mass of water called Antarctic Bottom Water is formed where seawater is cooled by the overlying air and made saltier by ice formation. Oceanographers examined temperature data between 1980 and 2011 at 10-year intervals. They found that the water has been disappearing at a rate of about eight million tonnes per second over the past few decades, equivalent to about 50 times the average flow of the Mississippi River. Changes in the water mass may impact sea level rise and rate of Earth’s heat uptake. Journal of Climate, April

Biology
Under the sex hormone 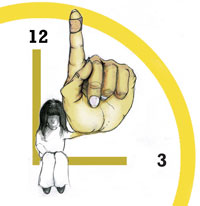 Worried why the cut you got on your finger while chopping vegetables is taking so long to heal? Well, it may be due to estrogen—a sex hormone in your body. Researchers have found that estrogen slows healing of wounds that lead to inflammation. Men who have lower levels of it recover faster. It’s long been known that women suffer more than men from chronic inflammatory diseases such as lupus or rheumatoid arthritis. Researchers say the hormone reduces the activity and expression of a lipid pathway (15-lipoxygenase-Lipoxin A4), which is an important protective pathway in many diseases. The discovery can help pave new ways to treat a wide range of inflammatory diseases. FASEB Journal, April 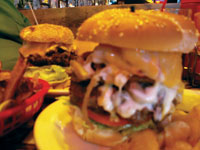 That high fat diets damage blood vessels is known. But what is unknown is that the damage may occur earlier than thought and may be one of the initial causes of high BP. Researchers compared the arterial compliance (change in dimension of arteries in response to stress) of two arteries—carotid (large) and thoracodorsal (small) in mice—one fed a high-fat diet for six weeks and the other normal diet. They found that the structural and mechanical properties of the small artery were rapidly altered while there were few changes in the large one. Researchers say changes in the small artery are of concern as they are the most potent predictor of cardiovascular diseases. Journal of Cardiovascular Translational Research, March 3 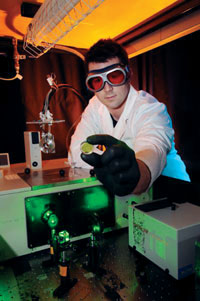 For long, nature has inspired us to develop techniques to suit our requirements. But nature can be difficult to imitate. For instance, splitting water into oxygen and hydrogen requires large amounts of electricity. But plants achieve this in sunlight. Understanding the process of splitting water could help devise more efficient methods to generate abundant supplies of oxygen and hydrogen in the environment. Researchers studied water-hydrogen networks in spinach. These networks are considered important in breaking the water molecule but it is not known how. The team replaced the water molecule with ammonia and found splitting of the molecule stopped. Researchers say maintaining the strength of the water-hydrogen network could be essential for the production of oxygen using artificial systems. PNAS, April 2