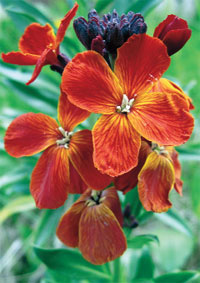 Scientific models may be lagging in predicting the impacts of global warming on plants. Researchers studying the timing of the flowering and leafing of plants in 1,634 species in observational studies and warming experiments in four continents have found that some plants are flowering up to eight times faster than the models anticipate.

According to them spring flowering and leafing will advance by five to six days per year for every degree Celsius of warming. Nature, May 2

An over-the-counter natural remedy derived from honeybee hives can help arrest the growth of prostate cancer and tumours. Scientists found that a compound caffeic acid phenethyl ester, or CAPE, found in the hives arrests early-stage prostate cancer by shutting down the tumour cells’ system for detecting sources of nutrition. It suppresses the activity of proteins, which are important sensors of sufficient nutrition that can trigger cell proliferation. Cancer Prevention Research, May 1

Groundwater pumped for irrigation, drinking water and industrial uses does not typically end up back underground. Instead, it flows into rivers or evaporates, eventually finding its way to the ocean.

This is causing the oceans to rise. A study estimates that by 2050, seas will rise about one-third of an inch (0.8 mm) per year due to groundwater pumping, and it may rival melting glaciers as primary cause for rising seas. To draw the conclusion researchers analysed groundwater depletion data from countries and compared it with satellite observations. Geophysical Research Letters, May 8

EVOLUTION
Taming of the horse 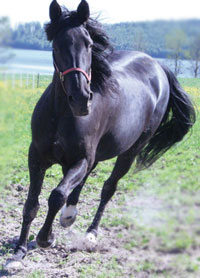 Horses were domesticated 6,000 years ago on the grasslands of Ukraine, southwest Russia and west Kazakhstan, shows a study of nuclear DNA taken from 300 horses from eight countries in Europe and Asia. Domestic horses then spread across Europe and Asia, breeding with wild mares along the way.

The finding brings to a close the debate on horse domestication and finds that archaeological evidence was correct. Archaeological evidence suggested that horses were tamed in the western part of the Eurasian Steppe (Ukraine, southwest Russia and west Kazakhstan), while mitochondrial DNA suggested domestication happened in many places across Europe and Asia. PNAS, May 7 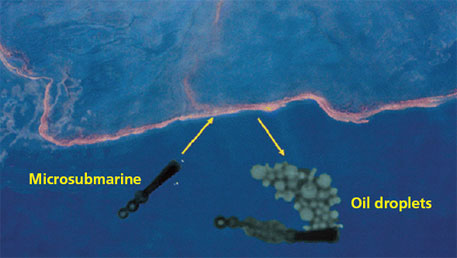 After the Deepwater Horizon incident in the Gulf of Mexico two years ago, there's been an increasing attention to cleaning up oil spills. Scientists have designed a first self-propelled microsubmarine to pick up droplets of oil from contaminated waters and transport them to collection facilities. The microsubmarines have a special surface coating, which makes them superhydrophobic and extremely oil-absorbent.

The submarines are 10 times smaller than the width of a human hair and their tiny motors are propelled by bubbles created from internal oxidation of hydrogen peroxide. ACS Nano, April 5

The fastest runners among the animals have one of the biggest eyes for their body size. This helps them when moving quickly, in detailed vision and vision in dim light. Till now it was thought that the time of the day that an animal is active determines the eye size. But to figure out what actually influences the size, researchers collected measurements of eye size, body size and running speed in 50 mammals. They found that 89 per cent of the variation in eye size was related to body mass and maximum running speed. Anatomical Record, May 2

Climate change is generally studied using ice cores in high latitudes. These fail to provide clues about changes in the tropics. Now stalagmites from caves in northern Borneo have been used as surrogates.

Stalagmites contain different oxygen isotopes depending on the ocean temperature during ages. Data shows that the jump in temperature and carbon levels 430,000 years ago shown by ice cores did not happen in the tropics Science Express, May 3 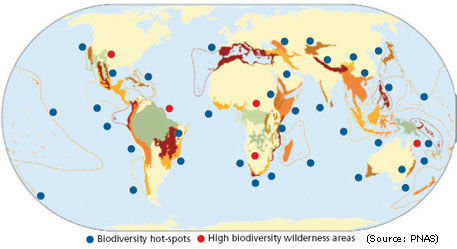 The biodiversity wilderness areas boast 1,622 languages. The researchers believe their study will help develop strategies for conserving both biological and languages diversity. PNAS, May 7

As spring advances more female bats will be born. A study has shown that bats produce twice as many female babies as male ones in years when spring comes early. The earlier in the spring the female are born, the more likely they are to survive and reproduce as one-year olds compared to later-born pups.

The team analysed data on the variation in offspring sex-ratio of the big brown bat, a common North-American species. The team has been unable to identify the biochemistry behind the skewed sex ratio. PLoS ONE, May 3

BIOLOGY
Inside a dog’s mind

Because dogs’ have coevolved with humans, it is thought that understanding its cognitive skills will help understand why dogs are sensitive to human cues. Scientists using functional Magnetic Resonance Imaging, the tool used for human brain, have mapped the brain of dogs and how it reacts to hand signals.

They found the caudate region, associated with rewards in humans, activates when dogs see signal for food. Scientists say this indicates that dogs pay close attention to human signals. PLoS ONE, May 11