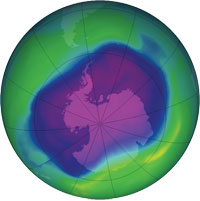 The Antarctic ozone hole has changed how waters in southern oceans mix. Surface waters are mixing into the subtropical deeper ocean at a higher rate than 20 years ago, while the reverse is true for waters closer to Antarctica. The changes are part of the oceans’ response to strengthened winds caused by thinning of the ozone layer by the now-banned chlorofluorocarbons. This has made subtropical waters in the southern oceans become “younger” and the upwelling, circumpolar waters “older”. This is speeding up global warming by threatening oceans’ ability to absorb atmospheric carbon dioxide. Antarctic Ocean accounts for 40 per cent of the carbon absorbed by the world’s seas. Science, February 1

A nanoscale microscope has become the newest tool in cancer diagnosis. The device has shown that healthy tissue is almost uniformly stiff but cancerous tissue has both soft and stiff parts. There has been a controversy for long over tissue texture knowledge is not enough for taking cancer treatment decisions by doctors. The nanoscale image from the device could now help them identify a malignant tissue and take surgical and chemotherapy decisions at an early stage of cancer. Presented at the Annual Meeting of the Biophysical Society in Philadelphia on February 4 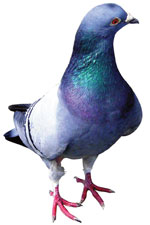 Scientists have cracked the genome of rock pigeon, Columba livia, 5,000 years after it was first domesticated. They have found 1.1 billion base pairs of DNA in the pigeon genome, compared to three billion base pairs in the human genome. The gene sequencing has unlocked secrets about the birds’ Middle East origins and it’s kinship with escaped racing birds. The genome has also revealed that a mutation in EphB2 gene makes their head and neck feathers to grow upward instead of downward, giving them head crests. The same gene causes Alzheimers disease and several cancers in humans. The finding will give new insights into bird evolution. Science, February 8 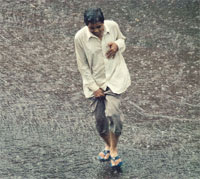 Berries are the most popular health food. The pigments that give them color can help delay ageing and fight cancer. But no one knew what happens to these compounds when exposed to saliva in the mouth. It has now been found that bacteria in the mouth completely degrade two of the six pigments found in berries. This would either mean eating berries does not provide us with their full health benefits or that it’s the by-products of pigment degradation that provide health benefits associated with berries and not the pigments themselves. Scientists are carrying out further studies to find out. Food Chemistry, November 15

We can measure our body temperature using a thermometer but within the body temperature varies from cell to cell. Just that the difference is so minute that it is not perceptible. But a new technique can help detect the temperature inside cells using a highly sensitive thermometer and an extremely accurate detection technique. This could help detect cancerous cells, which are at a higher tempreature than other cells. Presented at the annual meeting of Biophysical Society in Philadelphia, February 6

The theory that excess food intake, not less activity, is behind obesity epidemic has been reconfirmed. A 2009 study on the Tsimane tribe of the Amazon basin, for whom heart disease is practically non-existent and obesity is rare, led to a belief that modern sedentary lifestyle is to be blamed for heart diseases and that high level of physical activity drastically cuts diabetes, obesity and hypertension risk. But a new study has found that while Tsimane men are more active than the average Americans, the difference in activity levels is not significantly high. It shows physical activity alone does not reduce heart problems in Tsimane people and its their diet which keeps them healthy. PLoS One, January 31

Now you can check the level of mercury contamination in your glass of water using your cell phone. A rhodamine-coated sheet has been created that turns red if it is placed in water having more than the safe limit of mercury. A photograph of the sheet, taken with a mobile phone camera, can then provide an accurate estimation of the exact mercury concentrations. All that is needed is an image treatment software, many of which are readily available online and free, to see the color coordinates. Mercury is extremely toxic and causes neurological degeneration, kidney disease, muscular spasms and impaired cognitive ability. Analytical Methods, February 5

Artificial, single-species forests, also known as monocultures, are expanding fast across the globe and threatening native ecosystems. Growing diverse type of tree species for timber production, however, can provide better ecosystem services than industrial monocultures. More the number of tree species in a forest, better equipped it is to provide different ecosystem services such as carbon storage, berry production, food for wildlife, dead wood and biological diversity. Tree growth rates are also higher in mixed forests and both forestry and nature conservation stand to gain if a greater variety of tree types are present in a forest. Nature Communications, January 8 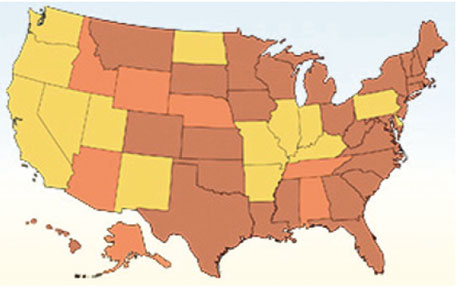 A low legal drinking age increases the chances of binge-drinking. A new study has investigated the long-term and persistent linkages between legal drinking ages and drinking behaviour among 39,000 people who began consuming alcohol in different US states having different legal thresholds in the 1970s. It shows people in the states with lower minimum drinking ages did not tend to drink more alcohol or to drink more frequently than those in other states but when they did consume alcohol, they typically drank more heavily than those in states with higher minimum drinking ages. Alcoholism: Clinical & Experimental Research, January 24