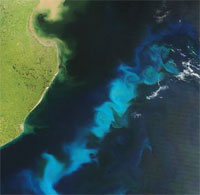 Estimates of the amount of iron dissolving into seawater around some of the world’s coasts may be drastically wrong. There is no standard, one-size-fits-all way to measure how much iron enters the water in different parts of the globe. A new study shows the amounts may vary by up to 10,000 times between one area and another, with profound implications for the impact of iron on the oceanic carbon cycle. Iron is key to CO2 removal from the atmosphere as it promotes the growth of phytoplankton or microscopic marine plants that mop up the greenhouse gas and lock it away in the oceans. The observation can help improve ocean-climate models. Nature Communications, July 19 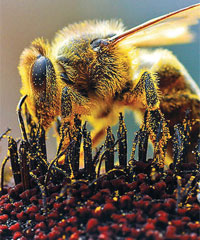 Reduction in the number of bees across the globe is a cause for concern. It has now been found that plant-pollinator relationships get compromised when bee species decline. Disappearance of just one bumblebee species can reduce seed- production in wildflowers by one-third. Most pollinators visit several plant species over their lifetime but often display floral fidelity over shorter periods. Thus, at a particular time just one bee species would visit a flower and carry pollen from this plant only. But when a bee species is lost, competition is reduced and such fidelity is lost. Bees, thus, start carrying pollens from several plants. This reduces chances of successful pollination as plants need pollens from their own species to reproduce. This shows biodiversity may be the key to conserve entire ecosystems. PNAS, July 22

From bendable cell phone displays to medical implants that move with the body, possibilities of stretchable electronics are endless. But this has remained a tall order as stretching a conductive material reduces its conductivity. But now an elastic conductor has been developed using gold nanoparticles and stretchy polyurethane. The new material is like an elastic metal. When it is stretched, the gold nano-particles rearrange themselves in a chain form in the polyurethane matrix. This makes the material stretchable as well as electrically conductive. Nature, July 17 (online)

Hearing and balance have been successfully restored in a group of genetically-deaf mice. This type of hearing loss occurs in animals with a malfunctioning SLC26A4 gene. Mutation of this gene is one of the most common causes of hereditary deafness in humans, too. When this gene does not express itself, endolymphatic sac in an animal’s inner ear swells during embryonic development. This restricts proper development of sensory parts of the ear, like cochlea, causing permanent deafness and loss of balance. The study shows that a therapy aimed at repairing the endolymphatic sac during embryonic development is sufficient to restore a lifetime of normal hearing and balance. PLoS Genetics, July 11 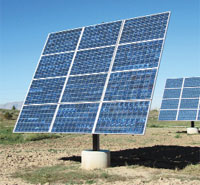 MATERIAL SCIENCES
Thin is in

When it comes to solar panel material, thinner is better. Now the thinnest-ever light-absorbing material has been developed that can absorb close to 100 per cent of visible light. Such efficiency is not possible with larger materials as the energised electrons have to cover a long distance to reach an electrode in that case. But within the new material it is a short trip—the material consists of trillions of 14 nanometre high and 17 nanometre wide gold nanodots sitting atop a thin wafer covered with a thin-film. This can significantly enhance the efficiency of solar cells while minimising the amount of material necessary to build the device. Nano Letters, July 10

AGRICULTURAL SCIENCES
Blast from past

The plant pathogen behind the Irish potato famine of the 1840s is still around and has evolved over the years to become even more virulent. A comparison of the genetic make-up of Phytophthora infestans samples collected from Europe during the 1870s and 1880s with the modern strains shows that the two are vastly different. One gene variant was not virulent in the historic samples but it is in modern-day samples. Some of the genetic differences suggest the pathogen was brought to Europe more than once, contradicting the theory that it was introduced just once. Studying how it has changed over time can lead to better late-blight management strategies. Nature Communications, July 18

DNA is not the only “double helix” in living cells. The protein factory of cells, endoplasmic reticulum, also has a double helical structure. It resembles a parking lot with helical ramps joining different levels. This optimises packaging, maximising the number of ribosomes, that perform protein synthesis in the endoplasmic reticulum. This may lead to new insights into the functioning of this important organelle. Cell, July 19

Nearly 5 million tonnes of plastic gets dumped into the oceans annually. A remarkable discovery has now been made about the countless confetti-sized bits of plastic circulating in our seas—they house several thriving microbial ecosystems. These microplastic reefs, where communities of bacteria and other microbes create energy from sunlight, reproduce, and prey on one another, have been dubbed the “plastisphere”. The microbial communities on the plastisphere have been found to be distinctly different from the ones in nearby ocean waters. The finding can help marine biologists understand which pathogens dwell on sea plastic and what role, if any, these microbes could play in marine and human health. Environmental Science and Technology, July 2 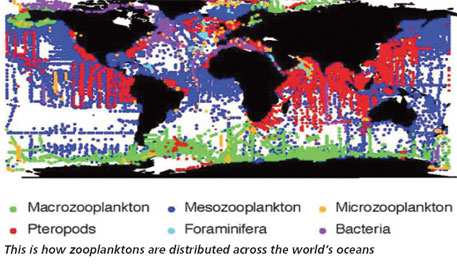 A global “atlas” that shows the distribution of tiny creatures in our oceans has been developed. The database, called Marine Ecosystem Data (Maredat), is the result of three years of collaboration between marine biologists from numerous universities across the globe. Boasting of half a million data points, it is the most comprehensive survey of marine plankton to date. Plankton refers to a broad class of organisms, ranging from microscopic bacteria to jellyfish, which are an integral part of the marine food chain. An understanding of how these invisible ecosystems change over time, how different plankton species are distributed and when they appear can help create better models for climate change and ocean acidification. Earth System Science Data, July 12