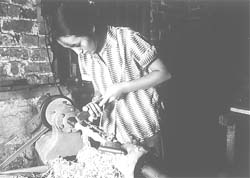 forces of friction are familiar to all of us. Walking, driving, the working of machines are some of the things that will not be possible without friction. On the other hand, friction is responsible for the wear and tear of moving parts, and needs to be minimised by use of lubricants and other fluids. Strangely enough, though we can conjecture about the microscopic causes of friction, there has been no direct experimental evidence for the atomic causes of friction. Now, scientists at the Lawrence Berkeley Laboratory ( lbl ) in California, usa , have demonstrated the atomic phenomenon behind friction.

The major causes of friction between metals appear to be the forces of attraction, known as adhesion, between the contact regions of surfaces, which are always microscopically irregular. Friction arises from shearing these "welded" junctions, and from the action of the irregularities of the harder surface plowing across the softer surface.

To test this, Miquel Salmeron and his colleagues at lbl employed an atomic force microscope ( afm ) probe, which helps create very detailed images of surfaces. The researchers ran the probe tip through a layer of closely packed, upright alkylsilane molecules (strand-like molecules used in lubrication), self-assembled on mica. The same afm tip bends and images the sample ( Physical Review Letters , Vol 82, No 2880).

When the probe pushed harder, the contact area increased and, of course, so did the friction. The surface molecules had to tilt, and to do that they had to unlock from each other. This consumes energy -- this energy is not recovered when the probe passes -- allowing the molecules to untilt. This is the energy of friction.

By adjusting the loading force of the probe, the researchers could get the molecules to tilt in discrete steps (cramped atoms moving into new notches along the molecule, one at a time) resulting in a quantised form of friction. The exertion felt by the probe provides a measure of this energy dissipation, thus quantifying, for the first time, the direct relation between physics at the molecular level and macroscopic friction.