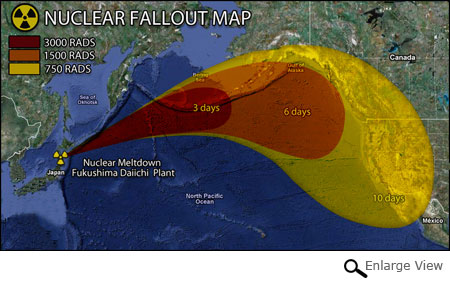 The Comprehensive Test Ban Treaty Organization, an arm of the United Nations in Vienna, forecast the possible movement of the radioactive plume coming from crippled Japanese reactors. It shows the plumes churning across the Pacific, and touching the Aleutian Islands on Thursday before hitting Southern California late Friday.

The projection gives no information about actual radiation levels but only shows how a radioactive plume would probably move and disperse.

The forecast, calculated on March 15, is based on patterns of Pacific winds at that time and the predicted path is likely to change as weather patterns shift.