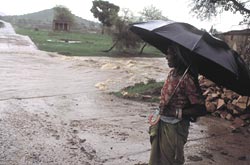 Monsoon winds result from changing patterns of atmospheric circulation that are caused by alterations in the patterns of heating and cooling of land and oceans. These winds change direction with seasons. One of the strongest monsoons is the one affecting India and Southeast Asia from June to September every year. The summer monsoon blows south-westerly across the Indian Ocean and is extremely wet. During the summer monsoon, particularly in July, there is usually a break period in the monsoon, when the rains stop and restart. A phenomenon known as the Madden Julian Oscillation (mjo) has been found to affect that break. The variation of mjo is affected by changes in ssts. According to experts, mjo is the main fluctuation of atmospheric circulation, which leads to variations in tropical weather that regulates South Asian monsoons.

Man Li Wu, the lead author of the study, used computer models that simulated atmospheric conditions of South Asia. One of the main purposes of this study was to examine the extent to which intra-seasonal sst variations affect mjo. Variations in mjo were found to coincide with changes in tropical precipitation over the Indian Ocean and western Pacific Ocean. The researchers found that sea surface temperatures increased 5-10 days before the strengthening of precipitation resulting from mjo. "Thus we concluded that mjo plays an important role in the variability of the South Asian monsoons," says Siegfried Schubert, a co-author of the study.