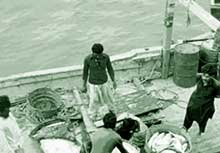 pakistani seafood exporters have been driven to the brink by a recent government ban on seafood exports following an inspection by a three-member team of the eu Food and Veterinary Office (fvo). T he team warned Pakistani authorities that the country would lose its largest seafood export market if it didn't ensure that the seafood met eu standards. The government admits that the ban was driven by quality concerns. It says it has asked the fisheries authorities of Sindh, the seafood industry hub, to work for allaying eu's apprehensions.

The eu countries, which accounted for 54 per cent of Pakistan's us$128 million seafood exports in 2003-2004, had already imposed 100 per cent checks on Pakistani frozen fish products after the detection of a contaminated consignment at Rotterdam, the Netherlands, in March 2002. "The Marine Fisheries Department (mfd) of the ministry of food and agriculture and livestock (mofal) was not able to demonstrate that the laws in force, which are intended to deliver the guarantees prescribed by the Commission decision in December 1999, were effectively applied...imports of fishery and aquaculture products originating in Pakistan cannot currently be considered as free from potential public health risks," said fvo director Colm Gaynor in a letter to mofal. A similar situation had led to Pakistan losing its European market for several months in 1998.

An official of the mfd, the federal government institution that certifies fish consignments, said the Karachi Fish Harbour Authority (kfha) has been asked to remove the shortcomings. According to a kfha official, an upgradation is on the cards for the entire production chain. A kfha spokesperson informs that the federal government would provide us$238,486 for a separate eu enclosure.

Meanwhile, exporters argue that the fvo team's visit was not exclusionist and shouldn't trigger any alarm about Pakistani seafood. "Before us, they visited India and Bangladesh. In 1998, both Pakistani and Indian seafood exports to eu countries were banned. But the ban on India was lifted earlier," one of them points out. "Initially, we were told the ban was for a week or two...it is almost a month now, and if the situation prevails, it would force most exporters to shut shop," rues Faisal Iftikhar, vice chairperson, Pakistan Seafood Industry and Exporters Association.