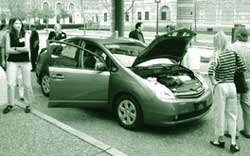 A group of former national security officials have taken up the cause of weaning us drivers from their oil addiction -- normally the realm of environmental groups -- and in a letter asked the Bush administration to spend us $1 billion over the next five years on lighter, more fuel-efficient automobiles. "This (fuel-inefficient vehicles) really constitutes a national crisis in the making," said one of the signatories, Frank Gaffney -- head of the Center for Security Policy, a thinktank, and a former Defense Department official under former president Ronald Reagan.

Other signers included Robert McFarlane, Reagan's national security advisor, and James Woolsey, Central Intelligence Agency director under Bill Clinton. The security experts sought input from groups --such as the New-York based Natural Resources Defense Council -- which have long lobbied for more fuel-efficient cars. The letter also urged the government to encourage makers to design vehicles from lighter materials to improve mileage. It also endorsed the use of hybrid vehicles that can run on internal batteries for short trips before switching to their internal-combustion engines.