Simple ways to detect arsenic and fluoride contamination in water 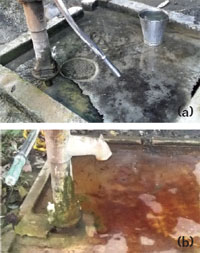 THERE is a ray of hope for millions of people in the country who are forced to drink water contaminated with high levels of arsenic and fluoride. Scientists in two different experiments have devised effective screening techniques to identify arsenic and fluoride in groundwater. While one relies on the colour of the tubewell platform to detect arsenic, the other uses sensors to detect fluoride content. Both the pollutants are otherwise difficult to identify and require lab-based sophisticated devices like spectrophotometer. The process is also complex and time-taking.

Fluoride concentration between 0.5 and 1.0 ppm (parts per million) is considered safe and helps prevent dental caries, but levels above 1.5 ppm initiate a disease called fluorosis that cripples bones and damages enamel-forming cells of teeth. According to the Central Ground Water Board under the Union ministry of water resources, more than 60 million people in India drink water with fluoride levels well above 1.5 ppm. To make matters worse, staple foods like red chillies, wheat and rice have been found to contain high levels of fluoride. Black salt is naturally rich in fluoride.

To find an easy way to detect fluoride, researchers at Cochin University of Science and Technology developed two portable optical sensors. The optical sensors are based on light emitting diode (LED) and optical fibre. A light is made to pass through any one of the sensors into a small tube containing fluoride-based solution. This light then falls on a photodiode. The output of the photodiode is amplified and sent to an analog-to-digital converter which provides levels of fluoride. “Besides being portable and low-cost, the method also allows analysis of data through computer,” says Aji Balan Pillai, lead author. For both the sensors, the amount of absorbed light depends on the concentration of fluoride in the sample. A part of light is absorbed by the sample, and the remaining falls on the photodiode. As the concentration of fluoride in water increases, the sample’s, ability to absorb light decreases.

The researchers also tested the efficacy of the sensors using water samples collected from Alappuzha district of Kerala, which has been reported to have high fluoride concentration in groundwater, and found it worked. K Susheela, director of Delhi-based non-profit Fluorosis Research & Rural Development Foundation, says, “Given the plight of fluoride contamination it is desirable to have very sensitive methods to detect it. Existing methods are not feasible.” P Ragunathan, a chemist formerly with IIT Kanpur, adds, “Unlike the conventional method that assesses ionic-strength and pH-dependent fluoride ion activity, the sensors directly measure fluoride levels. This can be of great help in estimating fluoride content of water bodies in rural areas.”

Like fluoride, arsenic contamination is also a menacing problem. About 60 million people living in the Bengal Basin alone are exposed to the heavy metal through drinking water above the WHO guideline of 10 microgram/litre. Drinking arsenic-contaminated water increases the risk of skin, lung and bladder cancer.

To quickly detect arsenic contamination, an international team of scientists, including those from IIT Kharagpur, says tubewell platform colour is a good indicator. Tubewells with black platform have safe level of arsenic while those with red colour are contaminated.

To test this the researchers took photos of 423 platforms in Chakdaha block of West Bengal and analysed water samples for arsenic, iron and manganese. They found that 73 per cent of the tubewells with black coloured platform had safe level of the heavy metal as the water samples, and the rest were high in arsenic.

But Dipankar Chakraborti, director at School of Environmental Studies, Jadavpur University in Kolkata, cautions, “We have seen that high iron content also contributes to reddish colour in platform. Further research is needed to examine this.” Ashis Biswas, one of the researchers, says, “The method cannot replace lab analysis but will cut down significantly on the number of wells that need to be tested.” Both the studies were published in the January issue of Environmental Science & Technology.