Beleaguered as the Capital's authorities are by increasing demand, large-scale wastage and heavy, unsustainable subsidies, the need for a more rational water management system assumes urgency. 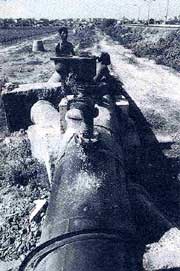 SUPPLYING running water to about 19 lakh households in Delhi is fast becoming an impossible task. Various administrative and political bodies concerned with water supply management are in desperate search of means to meet the growing demand.

The Union ministry of urban development has proposed that an autonomous body be set up to supervise water supply as well as sewage disposal, flood control and solid waste management in the metropolis. Ministry officials involved in the formulation of the proposal argue the single autonomous authority would be better able to coordinate with the states and make water supply "more efficient and satisfactory for the customers".

At present, while the Municipal Corporation of Delhi (MCD) is responsible for drawing water from all available resources, the job of supplying water is shared by MCD, the New Delhi Municipal Corporation and the Cantonment Board. Domestic consumers use about 72 per cent of the water supplied in Delhi. The administration has recently commissioned a study to determine the production and social costs of water supplied to Delhi's residents and industrial customers.

The proposal for the autonomous water authority, earlier scheduled to be tabled in Parliament during its winter session, is still pending with the Union Cabinet. Senior officials in the ministry now claim it would get the Cabinet's nod just in time for the budget session.

Another alternative under consideration is to involve private entrepreneurs in water supply and relieve the government of the financial burden of subsidising the Delhi Water Supply and Sewage Disposal Undertaking. Every 1,000 litres of water supplied costs the undertaking Rs 1.33, but consumers only pay an average rate of 90 paise -- the 43 paise difference totals up to Rs 125 crore annually, which is reimbursed by the government as subsidy.

The authorities are still undecided about how the proposed autonomous authority, which is expected to run on a no profit-no loss basis, would break even without government subsidy. One option is to allow the authority to price water at a higher rate.

However, ministry officials are not convinced higher tariff would deter consumers from wasting water. A senior bureaucrat in the ministry of urban development argues, "Petrol prices are going up regularly. Has that changed our habit of using personal vehicles?" Besides, such regulatory means are difficult to implement due to lack of administrative and financial resources and due to the difficulty involved in defining "domestic consumers". "What about those who draw groundwater by their own means? And what about the public taps?" the official asked. Instead, he suggests that rather than hike tariffs to force consumers not to overuse water, wastage should be identified and people should be educated not to misuse.
While there is still difference of opinion within the ministry over the tariff issue, the municipal commissioner of Delhi recently promised not to hike water rates in the coming financial year. This has put to rest speculation about the early commercialisation of water supply.

Another stumbling block in the process of privatisation is opposition from certain members of the ministry's consultative committee, who feel it will not relieve the administrative and financial burden of local bodies and may mean loss of jobs for lakhs of municipal workers.

So long as the government remains confused about the modalities of commercialising water supply in Delhi, the proposed autonomous authority will have its job cut out managing the huge set-up required to handle water supply with the limited manpower and finance available to it, and ensuring that the Capital, estimated to have a population of 1.28 crore by the turn of the century, gets enough water through the year.