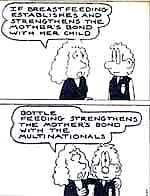 NESTLE seems to have perfected the fine art of profiting at another's expense. Its infant food substitutes have been a known cause of diarrhoea and death among year-old babies. Now, the company claims to have developed a carob-based baby food which, it says, helps remove diarrhoea-causing bacteria from the intestines.

WHO and Unicef experts, however, discount the Nestle claim, saying it is probably a follow-on product given to babies after four to six months to wean them off milk. But, the agencies assert, there is no way it can cure diarrhoea. Oral rehydration therapy (ORT), which uses a solution of glucose and salt in water, is the only proven way so far to help a child get over diarrhoea.

ORT is more effective if some soft, boiled rice is added to the solution to mitigate the effect of diarrhoea and provide some nutrition. WHO experts feel that Nestle's carob-based product will act in the same way.

Nestle is accused also of violating the 1981 WHO-Unicef code for marketing of breast-milk substitutes on two counts: not halting free or cheap supply of infant food substitutes to hospitals and maternity homes and advertising milk food substitutes by running down mother's milk.

Nestle's aggressive marketing of baby food substitutes has persuaded a large percentage of families in developing countries to switch from breast-feeding to bottle feeding resulting in a sharp increase in the incidence of diarrhoea. Studies show that on an average, exclusively breast-fed babies are 14.2 times less prone to diarrhoea and 3.6 times less prone to respiratory infections than those brought up on a mix of food substitutes and mother's milk.