Radioactive material can be pinpointed remotely 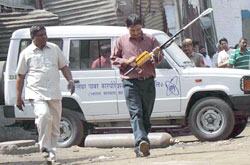 FIVE people working in a scrap metal shop in Delhi were hospitalised on April 7 following exposure to radioactive radiation. Nuclear experts rushed to the shop in Mayapuri junk market and found a radioactive material, cobalt-60, of the size of a pen cap. Nearby shops also indicated high radiation. It took them nearly two days of rigorous search to isolate several small pieces of cobalt- 60. Since existing devices like Geiger counter detect radioactive substances only when placed near it, experts had to check every bunch of scrap metal in the shops one by one.

To avoid such problems, two US scientists have proposed a concept that could lead to a technology to find radioactive material from a distance. If materialised, it would help nuclear experts scan a large area for hidden radioactive materials in a short time and avert incidents like radiation poisoning, said Victor Granatstein and Gregory Nusinovich of the Institute for Research in Electronics and Applied Physics of University of Maryland in USA.

As a radioactive material decays it emits gamma rays, which ionise its immediate surrounding air, meaning air particles surrounding the radioactive material contain free electrons. The scientists said if a high-powered pulsed electromagnetic wave hits the region, the amount of ionisation would increase exponentially, creating a flood of electrons in the small area. This phenomenon, dubbed breakdown of air, can be detected even from hundreds of metres away, the scientists noted in the November issue of Journal of Applied Physics.

The scientists said high-powered electromagnetic devices such as a gyrotron, commonly used in nuclear fusion research experiments, and gas lasers, used for cutting and welding, can be used to experimentally validate the concept. For example, a CO2 laser can detect radioactive material from as far as 100 metres on a clear day. Nusinovich said they are developing a high-powered potable gyrotron, which would be able to sense radioactivity from a long distance. It would be ready by 2011.

Gopalsami Nachappa, senior electrical engineer at Nuclear Engineering Division of Argonne National Laboratory in USA doubts practical implementation of the concept. After all, generation and transmission of high-powered electromagnetic waves over hundreds of metres in open air has the risk of causing radiation poisoning.