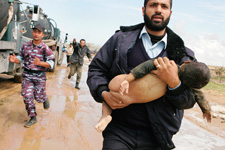 At least nine people were killed and many injured after a septic cesspool flooded a village in the Gaza Strip on March 27, 2007.

As the cesspool, containing 20,000 cubic metres of sewage water, released a torrent of putrid water and waste, it buried 250 houses in the village of Bedouin in Umm al-Naser in northern Gaza. Around 1,500 people were evacuated, while many still remain missing. Municipality officials and civil defence personnel rushed to the spot immediately to aid the rescue work. According to the village mayor, Ziad Abu Farya, 70 per cent of the village still remains surrounded by foul water. Following the incident, the Palestinian health ministry declared a state of emergency.

The sewage flood, which followed a period of heavy rains provides a clear illustration of Gaza's crumbling public infrastructure. In January 2004, a un report warned that the sewage facility was at its maximum capacity and flooding was inevitable unless a new waste treatment plant was built.

In a media statement, head of the Palestinian water authority, Fadul Kawash, said several sewage projects, including the one that overflowed, had been halted after the freeze of foreign aid since the victory of Hamas in the Palestinian elections of January 2006. Local media reports, however, noted that the projects remain crippled due to security risks in the area. The plant was also badly hit by air strikes during Israeli incursions into the Gaza Strip in 2006.

Meanwhile, the head of the Palestinian environment authority, Yousef Abu Safiya, said 40 other cesspools in the Gaza Strip desperately needed renovation. The Union of Gaza Local Municipalities has also said that 25 Gaza municipalities are on the verge of complete paralysis due to the inability to provide services to residents in light of the economic embargo.