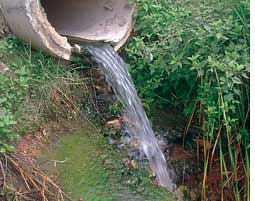 The Orissa State Pollution Control Board, or ospcb, has issued the Hirakud Aluminium Smelter a show-cause notice after its team of experts reported that the plant is releasing untreated wastewater, laced with toxins such as cyanide and fluoride, into the state's largest river, the Mahanadi. The waste discharge has damaged paddy fields and vegetation in the area.

ospcb is now vetting Hindalco's reply submitted on December 3, 2008. If the board is not satisfied with the response, it could ask the plant to close.


Hindalco's Hirakud smelter produces aluminium from alumina--100,000 tonnes a year. This results in production of waste containing cyanide and fluoride.While cyanide is a killer, fluoride causes vegetation to shrivel and shed leaves. Drinking fluoride-contaminated water can cause bone deformities.

During an inspection on September 27, 2008, the ospcb team found that the plant discharged untreated wastewater directly into adjoining waterways. At two places it released effluents into Khajur Nala, a tributary of the Mahanadi. The third outlet opened into a stormwater drain that joins the river. Untreated effluents from the smelter unit's power plant was also being released into Khajur Nala, the team noted in the report. This contravenes the Water (Prevention and Control of Pollution) Act, 1974, which stipulates that no company can discharge industrial wastewater outside its premises and must re-use after treating it in an effluent treatment plant.

Hindalco's waste samples showed fluoride concentration at these outlets was up to 18 times the permissible limit of 2 mg/litre. The fluoride level was also high--three times the norm--in the wastewater released by the power plant.

The pollutants were at far more dangerous levels downstream of Khajur Nala. After collecting effluents from the smelter and the power plant, as the river flows downstream it gets further contaminated with liquid discharge, or leachate, from the waste dump sites of Hindalco. "The leachate generated from these disposal sites contains high concentration of cyanide and fluoride. The liner system (protective layer of the dump sites) has already been damaged." A similar observation was made earlier and Hindalco was asked to take remedial measures. "It seems the industry has not taken adequate steps except constructing a masonry drain adjacent to the site," the report noted.

The team also observed hazardous wastes generated from the pots were dumped in a pit dug clandestinely in a plantation area. Pots are huge containers in which aluminium is extracted from alumina. Leachate from the pit was contaminating groundwater and a nala that joins the Mahanadi (see box ospcb raps Hindalco).

The report also noted damage to plants and paddy crops in the vicinity of the smelting unit. Leaves of trees to the northwest of the pot room were shrivelled and paddy crops in 50 hectares (ha) in the neighbouring Gundurpara and Nuagujatal villages were damaged because of fluoride emissions from the plant.


Fluoride discharge from the smelter had damaged plants and crops in these villages earlier, too.

On September 17, 2008, lush green paddy on about 80 ha in Gundurpada and Nuagujatal villages turned burnt yellow overnight. "Crop loss was observed in a definite direction from the plant. Even leaves of big trees falling in that direction had dried up suddenly. That was abnormal and was surely not a crop disease," said Ashok Pradhan, co-convener of a farmers' body. Farmers have been complaining of similar crop damages almost every year since 2003. But the extent of damage in 2008 made them suspicious of toxic releases from the aluminium plant, which they reported to the district agriculture officer of Sambalpur.

A team of agricultural scientists investigated the matter and said "The probability of the damage being caused by pollution and toxic leakages is very high". They suggested further investigation by the pollution control board.

Taking note of the heavy crop loss, the collector of Sambalpur asked Hindalco to compensate affected farmers with Rs 10,500 for each acre (or 0.4 ha), before ospcb submitted its final report. In November, Hindalco disbursed Rs 9,87,000 covering 38 ha against the total 50 ha of damaged crops.


This was not the first time the authorities rapped Hindalco for polluting.

Waste generated by the Hirakud smelter has increased significantly in recent years after it switched to new technology to increase production. But the company did not improve its waste management system accordingly, said sources in the ospcb. In fact, the report noted, the unit does not have "proper network for management of hazardous waste and is indiscriminately disposing these wastes at different locations".

But the company took no action. Several notices to comply with guidelines were also overlooked, said D K Behera, senior environmental scientist of ospcb who led the team of experts.

The unit's public relations officer J P Jena admitted that waste generation had gone up because of increased production. He denied the charge that waste was being dumped indiscriminately and discharged into Khajur Nala. "We have started constructing the effluent treatment plant. We are a law-abiding unit," said Jena.

They have not done so despite being asked more than a year ago, said Behera. Damaged crops and trees belie Hindalco's claims.