Seven brotherhoods and the love of trees, animals and birds

Nature and a close interaction with it is the basis of the Gonds’ religion. Parsapen or Fadapen, the supreme deity of the Gonds, is not personified, but a symbol of the supreme creative force at the root of all creation. Parsapen signifies the union of the male and female creative forces, Salla and Gangra. According to Nagpur-based writer, Motiravan Kangali, they may have been the origin of the Hindu deities, Shiva and Parvati. “The word Shaligram, signifying the Shivalinga, might have originated from Salla and Gangra,” says he. The symbol of Parsapen depicts the union of two forces, in a manner rather similar to the Hindu Shiva linga.

In later years, in the Hindi-speaking belt of Madhya Pradesh and Chhattisgarh, the name Parsapen came to be translated as Bada Deo or Buda Deo, giving the impression of a personified male deity, which, says Kangali, is not accurate.

The word ‘Gond’ comes from the root word ‘gondla’, signifying community. The Gond tribe’s basic claim to an identity separate from the rest of the Koytur (human being) rests on the tremendous importance of community organisation in the tribe’s culture. It is impossible to understand this culture without first understanding the social organisation.

The Gond community, according to legend, is the progeny of the 28 children rescued by Payandi Pari Kupar Lingo from the Kachchargadh caves. Legend has it that Lingo organized these children into groups – the first consisting of just one child, the second two, and so on, all the way to seven. These groups, the root ancestors of the Gond people, are known as ‘Angadevs’. Rather than individual identities, these ancestors are identified by their numbers, and each Gond clan identifies with one of the groups as its root ancestors. For instance, a clan which regards the third group of Angadevs as its ancestors is identified from the fact that it worships three deities. 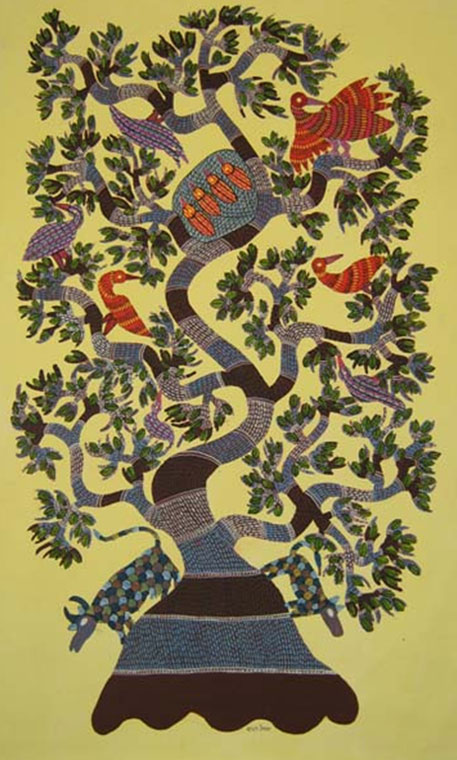 True to the pantheistic nature of the Gonds’ religion, each kur or clan is named after a living entity – usually a tree or plant, and sometimes animal or bird. A lot of Gond clan names end with the syllable “aam” (Pendam, Markam). That is because the word ‘aam’ means ‘tree’ in Gondi. For instance, the clan name Kangali comes from a tree found in the Betul hills of Madhya Pradesh where the clan originated. Each clan also has three totems – mostly a tree, a bird and an animal, but not necessarily so. The Kangali clan, for instance has the Kangali tree, the porcupine and the banyan tree as its totems.

“The significance of the totems is two-fold,” says Kangali, “First, every Gond man and woman is expected to worship and protect the totems of his or her clan. Violating this rule is the ultimate sacrilege.” Second, marriage is not permitted between clans which have the same clan name or have totems in common.

Despite this very complex system, marriage, in the Gond system, is essentially a voluntary arrangement between the two partners, supported by the families and communities. Marriages arranged by families are quite a recent phenomenon, one of the impacts of contact with the non-tribal world.

Kangali, who for the first time has compiled these facts painstakingly from oral sources, says that while it was never formally documented before, the social structure of the Gonds has miraculously survived in practice despite gradual loss of identity and the huge influx of external influences over the centuries. “We have found that the social organisation rules are the same all the way from Uttar Pradesh to Andhra Pradesh,” says he. “For instance, a family with the last name Madawi will be a seven-deo family, no matter which parts it comes from.”

The saga rules and marriage rules are still followed largely by the community, he says. “Even today, even in an urban setting, there is a lot of bonhomie and joy when people belonging to the same saga come across each other, even if they are complete strangers.” The reason, says he, is that family customs, practices, food and other elements are common within a saga, and that creates an instant bond. “Also, the concept of fraternity is still taken rather seriously within the community. A Gond person approaching a saga for help is not likely to be turned away.”