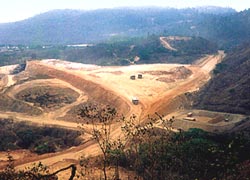 A study conducted in Valle de Siria in Honduras has found that the outbreak of skin diseases and increase in baldness among the local population could be attributed to improper mining practices. Consequent to the results of the study being published, local communities, environmental groups and municipal authorities are up in arms against "weaknesses" in national mining laws and irregularities in granting environmental licences.

Community members have now launched a campaign against the Canada-based company, Maverick, and Minosa of South America. The two mining companies have been carrying out operations in Honduras. Significantly, Minosa was fined us $54,000 in 2003 for contaminating the environment. Juan Carlos Elvir, the mayor of Santa Rosa de Copn -- which is one of the affected areas -- has initiated action against Maverick. It had been given an environmental licence to exploit 400 hectares in the El Guisayote national reserve. A commission of experts had earlier concluded that the permission was illegal.