The countdown to the cleaning up of the Yamuna has begun. The Supreme Court sets a deadline 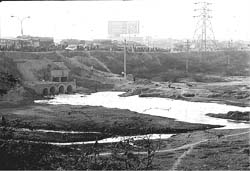 after cracking the whip on the Delhi government to clean up Delhi's air, the Supreme Court ( sc) has set its eyes on cleaning up the Yamuna. On April 10, 2001, the apex court asked the Delhi government to clean up the river by March 31, 2003. The bench comprising Justice B N Kirpal, Justice Ruma Paul and Justice Brajesh Kumar said that "one can't deny the fact that Article 21 even includes right to clean water, and this is the right which 13.8 million citizens of Delhi are deprived of." The bench felt that the water of Yamuna is much cleaner when it enters Delhi, but becomes dirty when it reaches the Agra canal.

The bench has asked the ministry of urban development to file another affidavit indicating "as to how its integrated action plan can be implemented within the prescribed time frame." The court has also asked the chief secretary of the Delhi government to file an affidavit stating "what steps would be taken to improve the quality of water, so that the river can no longer be called ' mailee (dirty) Yamuna' after March 31, 2003."

"About 40-50 per cent of the capital's residents do not have access to clean drinking water and it is the government's responsibility to see that common effluent treatment plants ( cetp s) are set up," says Ravi Agarwal of Shristi, a New Delhi-based non-governmental organisation ( ngo ). He feels that the government will not be able to meet the 2003 deadline because government departments are usually known to drag their feet on court orders. "There is no reason why the government cannot implement this order, but it depends on how strictly the apex court makes the government implement its order," adds Agarwal. Meanwhile, sources in the Central Pollution Control Board told Down To Earth that it would be difficult to implement the order because of the technical difficulties.

Sureshwar D Sinha of Paani Morcha, a New Delhi-based ngo, feels that "the court has not gone into the technical details while passing the order. The water quality can improve only all the cetp s are set up. There is proposal for 14 cetp s, but only four have been set up and even those are not functioning properly.