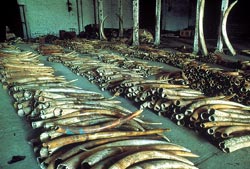 the standing committee of the Convention on International Trade in Endangered Species (cites) has deferred the one-time sale of 60 tonnes of stockpiled ivory by South Africa, Namibia and Botswana. The decision was taken at the panel's meeting, which took place in Geneva from March 15-19. Earlier, in November 2002, the cites C onference of Parties in Chile had made a provisional, one-off allowance for these countries to sell the existing stocks once certain conditions were met.

But the cites committee ruled that the countries must have a system to monitor the illegal killing of elephants, and any ivory seized or of unknown origin should not be traded. It further stipulated that verification was needed to ensure that only registered government stocks are sold. The cites panel also ordained that sales proceeds be used for elephant conservation and other development programmes in or adjacent to the African elephant range states.

The decision also aims at enabling cites' ivory trade watchdog body, Monitoring the Illegal Killing of Elephants (mike), to develop a model for studying a possible correlation between elephant deaths and ivory sales. " mike was asked to investigate such a relationship and find a model to quantify it. It has not been able to complete the task," revealed Rajesh Gopal, the Indian representative at the cites meet. Gopal is the director of the Union ministry of environment and forests' Project Tiger.

It is often conjectured that allowing international ivory trade in African countries might increase poaching of elephants, even in Asia. "The chances of mike actually coming up with a model that links the sale of ivory to elephant mortality now seem rare," feels Ashok Kumar of Delhi-based Wildlife Trust of India. He was also present at the meeting. "Experts now acknowledge that establishing a causal link is impossible. But most parties still believe that the mike report will assess quite accurately whether trade is the cause of increased poaching," says Susie Watts of Wildaid, a conservation group headquartered in San Francisco. "India, on its part, has always opposed the trade," says Gopal. So has Kenya, along with several other African nations. However, the final decision has been deferred to the next Conference of Parties in October 2004.

Meanwhile, during a discussion on Asian big cats, Gopal informed the meeting that India had decided to set up a cites cell that would also house a wildlife crime monitoring cell. He stressed that undue pressure had been imposed on developing countries like India to regulate illegal wildlife trade. In contrast, developed countries, which house more than 15,000 tigers in captivity, are not monitored, he alleged.

The standing committee rejected a proposal for a resolution against India for not adequately preventing the trade in the Tibetan antelope's hide, used to make shahtoosh shawls. Gopal told the meeting that the matter was sub-judice in India, even as the Jammu and Kashmir government had upgraded the animal's protection from Schedule ii to Schedule i of the state's Wildlife Protection Act.

However, in a new development, the j&k government has now decided to oppose the ban on shahtoosh trade (see box: Changing tack).