The Mumbai Metropolitan Region Development Authority has locked horns with environmentalists as it prepares to execute its ambitious bridge project—the Mumbai Trans Harbour Link (MTHL). The 22km road corridor, to be constructed at an estimated cost of Rs 8,800 crore, will connect Mumbai and Nhava Sheva in Navi Mumbai. Environmentalists are demanding a change in the route alignment, saying it will destroy an important flamingo habitat, mudflats and mangroves.

“We are not against development. But at the same time, we want to protect the environment which is threatened by MTHL,” says Asad R Rahmani, director of non-profit, Bombay Natural History Society. BNHS is opposing the positioning of MTHL at Sewree, the starting point of the link (see map). 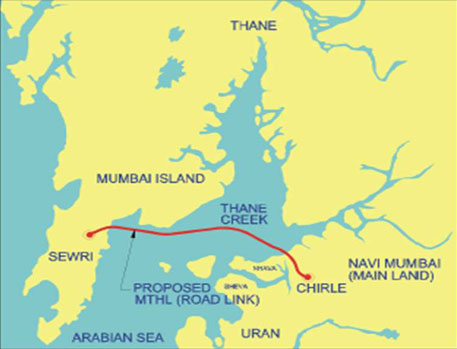 In a letter to chief engineer of MMRDA S M Sabnis on November 10, BNHS has asked the authority to shift the starting point of the MTHL around 700 metre south of its current position. “This will help saving the mudflats and flamingos. This will achieve the goal of saving the mangroves for conservation and development together,” says Rahmani while adding that birds and bridge can coexist if given a chance.

“The entire population of flamingos will vanish if the link is constructed from its current location as it will pass right through the mudflats where thousands of flamingos come to feed every year,” says Rahmani. 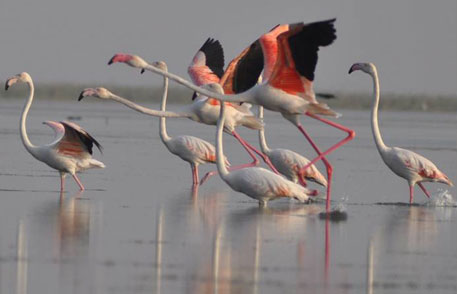 Rahmani says there is record of 150 bird species, including resident and migratory, in the area where the proposed MTHL will start. “BirdLife International and BNHS have designated the area as Important Bird Area (IBA) and have also identified it as a potential Ramsar Site,” he adds. The bird species found in the area include greater and lesser flamingos, black headed ibis, brown headed gull, whiskered tern eastern imperial eagle and black tailed godwit. The flora in Sewree includes 53 species of vascular plants, 10 mangrove species and 13 mangrove-associated species. Thousands of greater and lesser flamingos migrating from Kutch and beyond prefer Sewree mudflats and Thane creek due to ample availability of feed, including blue green algae, crustaceans and molluscs.

MMRDA officials, however, seem unwilling to relent. They have refused to realign the link, citing technical reasons. While responding to BNHS letter in its reply dated November 28, MMRDA, did not mention the realignment of the bridge. “The letter said they will ensure minimum impact on the environment and mitigate environmental risks. However, there was no mention of whether the bridge will be realigned,” says Rahmani.

Project based on outdated EIA report

MMRDA did not respond to a request for a meeting on the issue. BNHS has now decided to rope in civil society members and other like-minded non-profits in the city to devise a strategy to save the Sewree mudflats. Deputy director, BNHS Deepak Apte says the project is proceeding on the basis of an Environmental Impact Assessment (EIA) report which was prepared around two decades back. “We do not have any information about a fresh EIA report. So much so that the EIA report referred to by MMRDA is not available for general public,” Apte says. 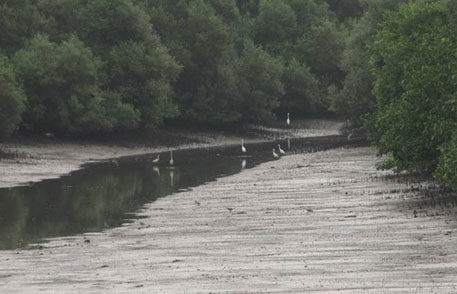 Responding to the BNHS activists’ demands on saving the Sewree mudflats, MMRDA officials have said there was no change in the alignment and say shifting the starting point south will harm the integrity of the Elephanta caves, a heritage site. According to an MMRDA official, who did not wish to be named, “The objections of BNHS regarding the flamingo destruction are uncalled for. It is just a matter of couple of years till the construction on shore is completed. Rest of the construction is to be done in the deep sea. It will not affect the birds.” The official says the alignment has already taken care of the mudflats which attract flamingos every year”. “MMRDA is open to any practical suggestion made by those serious about the implementation of the project,” he adds.

The project is currently in the bid-stage with over 175 bidders expressing interest in constructing the bridge road.