A shift to public transport should avert the energy crisis 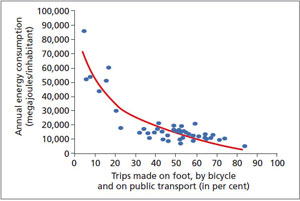 Cities with a higher share of public transport, walking and cycling have a lower cost of transport for the community (as a percentage of GDP)

Ã”Ã»Ã¡ In India, the use of public transport has gone down. During the 1950s, buses accounted for 11 per cent of registered vehicles, now the figure stands at 1 per cent 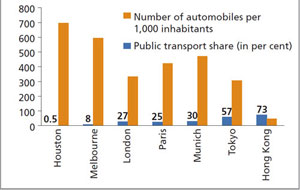 Ã”Ã»Ã¡ Obviously, private vehicle use is rising sharply. For instance, in Delhi, cars/jeeps/station wagons showed an annual compounded growth rate of 9.27 per cent in the decade ending 2003-2004. In Hyderabad, the number of autorickshaws, two-wheelers and cars grew by over 150 per cent during 1993-2002 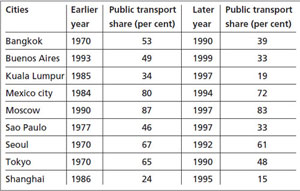 Ã”Ã»Ã¡But the use of private vehicles is increasing, while the share of public transport (in meeting travel demand) is decreasing by 0.2-1.4 per cent annually