As it rotates the Earth wraps time and space around itself 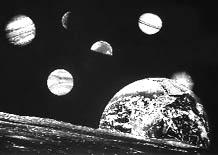 the Earth is dragging space and time around itself as it rotates. For the first time there is evidence of a phenomenon predicted 80 years ago on the basis of Einstein's theory of general relativity.

This theory predicts that huge objects, in this case a planet, drag space-time around themselves as they rotate. It can be compared to what happens if a bowling ball spins in a thick fluid such as molasses. The ball tends to pull the molasses around itself. Anything stuck in the molasses will also move around the ball. Similarly, as the Earth rotates, it pulls space-time in its vicinity around itself. This can and will shift the orbits of satellites near the Earth.

By measuring shifts in the orbits of two Earth-orbiting laser-ranging satellites, the Laser Geodynamics Satellite I ( lageos i ), a National Aeronautics and Space Administration ( nasa) spacecraft, and lageos ii , a joint nasa /Italian Space Agency ( asi ) spacecraft, researchers at nasa believe they have detected the effect. The research is the first direct measurement of this bizarre effect called "frame dragging."

The team was led by Ignazio Ciufolini of the National Research Council of Italy and the Aerospace Department of the University of Rome, and Erricos Pavlis of the Joint Center for Earth System Technology, a research collaboration between nasa 's Goddard Space Flight Center, Greenbelt and the University of Maryland at Baltimore.

"We found that the plane of the orbits of lageos i and ii were shifted about two metres per year in the direction of the Earth's rotation," says Pavlis.

"This is about 10 per cent greater than what is predicted by general relativity, which is within our margin of error of plus or minus 20 per cent. Later measurements by Gravity Probe b , a nasa spacecraft scheduled to be launched in 2000, should reduce this error margin to less than one per cent. This promises to tell us much more about the physics involved," he adds.

This theory of relativity has been very successful at explaining how matter and light behave in strong gravitational fields, and has been tested using a wide variety of astrophysical observations. The frame-dragging effect was first derived using general relativity by Austrian physicists Joseph Lense and Hans Thirring in 1918. Known as the Lense-Thirring effect, it was previously observed by the team of Ciufolini using the lageos satellites and has recently been observed around distant celestial objects with intense gravitational fields, such as black holes and neutron stars. The new research is the first direct detection and measurement of this phenomenon.

The team analysed data obtained over four years from the lageos satellites from 1993 to 1996, using a method devised by Ciufolini three years ago. The other team members are Federico Chieppa of Scuola d'Ingegneria Aerospaziale of the University of Rome, and Eduardo Fernandes and Juan Perez-Mercader of Laboratorio de Astrofisica Espacialy Fisica Fundamental ( laeff ) in Madrid.

The measurements were arrived at by using an extremely accurate model of the Earth's gravitational field -- Earth Gravity Model 96 -- which was made available recently by the Laboratory for Terrestrial Physics at Goddard, the National Imagery and Mapping Agency, Fairfax and the Ohio State University. It was developed over a four-year period using tracking data from approximately 40 spacecraft.

John Ries, an expert in satellite geodesy at the University of Texas at Austin, cautions that it is very challenging to remove the much larger effects of tidal changes and small zonal influences in the Earth's gravitational field, so that estimating the possible errors in the measurement of the Lense-Thirring effect is itself uncertain.

"The effect being sought is about ten million times smaller than classical Newtonian disturbances on the plane of the lageos orbits, requiring an enormously accurate treatment of background effects," says Alan Bunner, science programme director for the structure and evolution of the universe in the office of space science at nasa headquarters, Washington, dc .

lageos ii , launched in 1992, and its predecessor, lageos i , launched in 1976, are passive satellites dedicated exclusively to laser ranging, which involves sending laser pulses to the satellite from ranging stations on Earth and then recording the round-trip travel time. This enables scientists to determine precisely the distances between laser ranging stations on Earth and the satellite.