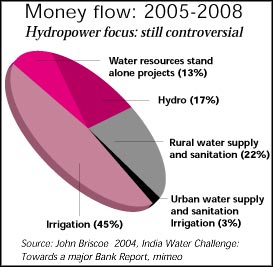 The World Bank Group will increase its lending to India over the next four years. The bank's executive directors approved an annual target of us $3 billion on August 26 in Washington dc, usa. It will be invested in infrastructure projects, human development and on securing rural livelihoods. Two policy elements stand out: a controversial return to funding hydropower projects and a welcome shift in its policy on working with states.

More than a decade after it had to withdraw from the Sardar Sarovar project in the Narmada valley due to protests, the bank's new strategy envisages an investment of up to us $550 million in two hydropower projects, which are yet to be decided. One, currently under review by the bank, is the Middle Siang (Siyom) project in Arunachal Pradesh.

What has prompted this shift? Says Sumir Lal, the bank's external affairs advisor in India, "There is now a willingness on government's part to pay attention to major issues, such as site selection, safety of the dam and r&r." But is intent enough? Perhaps not. And so the draft strategy goes on to make its case: major actors such as the National Hydroelectric Power Corporation Ltd (nhpc) have started to improve their environmental and safeguard practice. The bank will seek new avenues for support on a modest scale for hydropower development (see graph: Money flow: 2005-2008).

The bank's assessment does not appear to concur with ground realities. Take for instance, the Middle Siang project itself, also being carried out by the nhpc. In April this year, the project was put up for clearance to an expert committee under the Union ministry of environment and forests without having held a public hearing. At a public hearing held on August 3, many people present were not allowed to speak. Lal however asserts that the bank its own set of safeguard policies.

The shift in the bank's policy on working with states has come about as a result of the widening gulf between the faster and the slower growing states. Earlier, the bank would provide structural adjustment and project-based loans only to those states with a certain proportion of the poor, if they were reforming states. As a result, the bank was funding only three states. The new strategy will offer the same kind of support to 12 of India's poorest states. However, it would follow a more proactive strategy of reaching out to four of these states: Bihar, Jharkhand, Orissa and Uttar Pradesh.