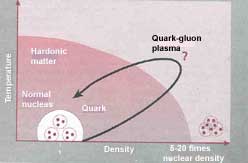 interactions between quarks and gluons is a key area which presents gaps in our understanding of the nature of matter. Quarks (the smallest particles comprising matter) and gluons (massless particles that carry a strong nuclear force) are usually not seen by themselves. In ordinary matter and under normal circumstances, these are always seen in the garb of more complex particles like protons or pions. This process called confinement -- whereby naked quarks cannot be seen -- is still not completely understood. But under certain conditions, it is possible that quarks and gluons exist outside these complex particles. Unfortunately, this state of matter, called the quark-gluon plasma is possible only under extreme conditions (densities that are 10 20 times larger than ordinary matter). The quark-gluon plasma is conjectured to have existed in the early universe, a few microseconds after the Big Bang. At that time, temperatures were very high and the densities extreme ( Science , Vol 272, No 5281).

However, recent reports from cern , the European particle physics laboratory suggest that researchers may have succeeded in getting their first glimpse of this elusive state of matter. The na 50 detector at the super proton synchrotron (sps) at cern has reported results that indicate the possible formation of a quark-gluon plasma. The sps accelerator fires heavy ions like lead into stationary targets. The energy of the collision is large enough to create conditions for the formation of the quark-gluon plasma.

However, detecting the plasma, which exists for all but a fraction of a second (10 -23 seconds) before it recombines with ordinary particles, is quite another matter. Nonetheless, there is a method by which the formation of plasma can be gauged. A certain particle, called the j/psi particle plays an important role in detecting it. The j/psi is a particle made up of a charm quark and its anti particle. The j/psi s present would initially melt into their constituent quarks which would fly apart. When the plasma cools off, these will not be able to recombine because they are too far apart. Other particles also face the same fate, but they are made up of up-and down-quarks which are around in the plasma in abundance and so they can recombine. Thus, the key to the detection of the quark-gluon plasma would be the missing j/psi s. A dramatic reduction in the j/psi s -- indicating a possible formation of the quark-gluon plasma -- has been noticed. Although the scientists are still not claiming to have seen the plasma, there is a lot of excitement in the community. Some other experiments at cern , like the helios iii and ceres have also reported results which point towards a quark-gluon plasma.