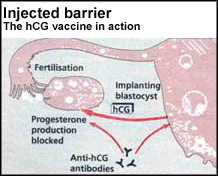 Caught in the debate over that thin boundary line between life and void is a promising Indian birth control vaccine. The National Institute of Immunology's (nii) unique vaccine "immunises" women against human chorionic gonadotropin (hcg) hormone, which is produced by the cluster of cells that develops from a fertilised egg, and is essential for its implantation to the uterus wall. The us pro-life lobby calls it an abortifacient (drug causing abortion), not a contraceptive, and the us government has declined to fund its efficacy trials. The vaccine evokes immune response in the woman's body by way of injecting a sub-unit of hcg along a carrier substance like tetanus toxoid. The vaccine does now interefere with ovulation or any other physical processes.

Rosemary Thau, a leading contraceptive researcher with the Population Council, an American NGO, said in a recent press interview: "I was unable to get Government funds for the human trial because the vaccine stopped pregnancy after fertilisation had occurred." Thau, withdrew her support to the programme due to fund slashes.

As the efficacy trials of the vaccine have been completed in the All India India Institute of Medical Science and Safdarjung hospital, New Delhi, and the Postgraduate Institute of Medical Sciences, Chandigarh, the nii scientists defend their vaccine. Explains G P Talwar, nii professor emeritus, who headed the 20-year-old vaccine project till recently, "The vaccine has been proven effective in a total of 1,200 menstrual cycles, failing to prevent just one pregnancy, of which the baby was normal".nii scientists point out that the us fund withdrawal will not seriously affect the vaccine research. "We have enough government support," says an nii spokesperson. The scientists are upbeat. "Ours is the only birth control vaccine in the world that has its safety, reversibility, efficacy proven," says Talwar.

Meanwhile at the International Centre for Genetic Engineering and Biotechnology, Delhi, research has begun to produce a "recombinant" version of the vaccine -- the same vaccine synthetically produced -- by employing biotechnological methods.