Should customs concessions be withdrawn?

Proposal by manufacturers to withdraw import concessions on certain pesticides is resented by farmers who fear that it will result in major price hikes. 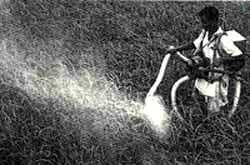 FEARING a proposal to withdraw customs duty concessions on pesticides will result in price increases, farmers' organisations in north India are heading for a showdown with the government and pesticide manufacturers. The proposal to end customs concessions relates to certain pesticides that are also produced in India.

The farmers contend the withdrawal of the customs concessions will discourage imports and give domestic manufacturers a virtual monopoly.

The pre-budget proposal by the Pesticides Association of India (PAI) is that the customs duty on 13 pesticides be raised from a concessional levy of 75 per cent to the normal 110 per cent. PAI contends as these pesticides are also manufactured domestically, its proposal could help Indian manufacturers. PAI has informed the union agriculture ministry that the domestic installed capacities are more than adequate to meet present demand. But this is not borne out entirely by figures provided by the Department of Chemicals and.

On the other hand, farmers interviewed in Pali, a village in Faridabad district and at the Bharat Krishak Samaj office in Karnal, both in Haryana, say current agricultural support prices are insufficient to pay for all the material inputs, leave alone labour costs. "We are getting Rs 280 per quintal of wheat, which does not even cover the costs of fertiliser used," says Hetram, a panchayat member at Pali. "What we should get is Rs 800 per quintal. Then, the government can increase pesticide prices".

According to department estimates, pesticides produced in the country are as much as 20 per cent costlier than imports. This is because petroleum, capital goods and other inputs are costlier and interest rates higher, all of which outweighs the advantages of comparatively lower labour costs and of savings on royalty payments.

Industry figures, however, deny that increasing the customs duty on these pesticides will allow them to form cartels. PAI executive director S C Mathur, defending the move to raise customs duty, says, "The concessional duty rates were announced when these pesticides were not being manufactured in India. Now that the country makes enough of these 13 pesticides to meet its own needs, there is no need for them to be given concessional import duty rates."

But Bharat Krishak Samaj executive chairman Krishan Bir Choudhary countered, saying, "The decision to deny these pesticides the concessional customs duty rate will cut the throats of farmers. Increasing the import duty on these will favour a certain section of the pesticides industry, at the expense of the farmers. "He suggests instead that a commission be set up for equitable pricing of pesticides, as was done in case of pharmaceuticals.