Complex modern lifestyles have disturbed the biological rhythms of the body, giving rise to a lot of diseases and forcing researchers to delve into the enigma called sleep 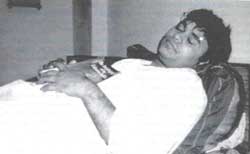 FROM darkness we come and into darkness we go, but in between this a mysterious darkness ebbs in and out of our lives every 24 hours, rejuvenating us for the struggles of the day. But for some 20 million Americans suffering from obstructive sleep apnea, this biological necessity called sleep is a nightly struggle to breathe.

Apnea is the condition in which a person's ability to inhale while asleep becomes blocked for a brief period extending from 20 seconds to a minute or more, until they become partially awake to gulp in air with a snore. Then they immediately fall back into a sound sleep repeating the cycle.

'The condition renders people deficient in vitality, good humour, concentration, memory and the ability to stay awake and alert during the day, especially during sedentary activities like reading and driving. Yet, an estimated 80 per cent of those affected by sleep apnea do not know it. Only a few people are aware of the fact that these sleep -shattering snores are symptoms of a serious and potentially fatal disorder that can and should be treated. Even among those who now know that they have sleep apnea, many waited a decade or more to find out why they repeatedly fell asleep at the wheel and always felt tired. Obstructive sleep apnea results from a sleep induced relaxation of the muscles in the back of the mouth and throat that causes the main airway to collapse, totally blocking the ability to inhale. As blood levels of carbon dioxide rise and oxygen levels fall, the hapless sleeper struggles to take a breath. Finally, the person comes out of deep sleep to restore adequate muscle tone to open the airway briefly and allow a breath. After sleep resumes, breathing stops again and again, the sleeper being usually unaware of these awakenings.

Apnea becomes more common with age, although children are sometimes affelicted. The condition seems to be hereditary, according to a study by Susan Redline, a pulmonary specialist at Case Western Reserve University in Cleveland, us. A tendency towards sleep could be due to an underlying genetic susceptibility or could result from a farnihal weight problem. Excessive fatty tissue in the neck region in obese people is believed to cause airway blockage. In these people, loss of significant amount of weight often overcomes sleep apnea.

Various abnormalities in the mouth and throat can also cause a total obstruction 'and sleep apnea. Unlike the ordinary snoring that accompanies rhythmic breathing, sleep apnea, with its breathing disruptions, is a dangerous condition that can cause hypertension, abnormal heart rhythms, heart attacks, strokes and sudden death.

To detect the presence of the disorder, various screening devices like snore meters can be worn at home overnight, but an accurate diagnosis of sleep apnea usually requires spending a night in a sleep laboratory for complete monitoring of limb movements, sleep stages, breathing patterns, heart function, partial pressures of carbon dioxide and oxygen in blood.

With the changing lifestyles of people, sleep-related diseases are becoming more and more common. Many of these disorders can be treated by a shift in routine and by following a rigorous discipline, like going to bed and getting up at the same time almost everyday, exercising regurly, losing weight and abstaining from cigarettes and alcohol just before going to sleep. For the more serious cases, a mask connected to a blower that forces air through the nasal passages may be worn over the nose and mouth during sleep. This therapy which keeps the airway open is called the continuous positive airway pressure (CPAP). This has been shown to eliminate day time grogginess and cardiopulmonary problems and produce rhythmic breathing. But CPAP also has its side effects like nasal stuffiness, a running nose and facial discomfort, resulting from pressure. However, this therapy represents a better option than the original cure for sleep apnea: tracheostomy, the surgical creation of a breathing hole in the throat to bypass the sleep-related obstruction.

Those who cannot Use CPAP may benefit from the use of an individually molded oral appliance, that repositions mouth structures during sleep.

Whatever may be the solution, it is most important to repeat the original sleep study to determine the effectiveness of the remedy not just in reducing snoring but in restoring normal breathing patterns, heart function and levels of blood gases. Periodic assessments are also required as patients commonly relapse into old habits or stop using the breathing device.