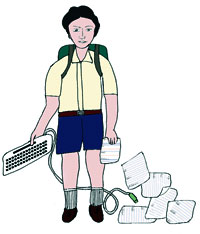 From August schoolchildren in the US state Indiana will not be required to learn joined-up, or cursive, writing.

They will have to learn basic typing skills, which education officials say are more useful in the modern employment world. The move is part of the US Common Core State Standards Initiative, which makes no mention of handwriting. US schoolchildren currently learn joined-up writing from about the age of eight. Many schools have said there is not enough time in the term to teach both cursive writing and typing skills.

Scott Hamilton, an Indiana clinical psychologist, says the time children spend labouring over script could be better used. “The move makes sense in the increasingly digital world.” But parents and teachers have reacted angrily. “The fluidity of cursive writing allows for gains in spelling and a better tie to what children are reading,” Paul Sullivan, a California educationalist told CNN.