Signs of hope for tigers and rhinos

Two recent raids have proved to be a setback for the lucrative wildlife trade in India. Though enforcement agencies are becoming more efficient, there are many rough edges to be ironed out 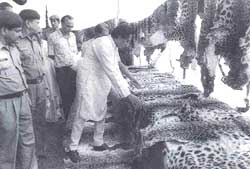 TWO HOARDS of banned animal skins and bones, worth about Rs 3.5 crore in the international market, were seized in Delhi on August 30 and September 1. The seizures exemplify the intelligence-gathering skills acquired by the Indian arm of the Trade Record Analysis of Flora and Fauna in Commerce (TRAFFIC), the wing of the World Wide Fund for Nature that monitors trade in wildlife.

After four months of painstaking work, TRAFFIC-India investigators received information on the location of a large consignment of animal skins and bones that was to be shipped abroad. This resulted in a raid in the north Delhi settlement of Majnu-Ka-Tila, whose residents are mainly Tibetan refugees. The officials recovered 287 kg of tiger bones, 8 tiger skins, 43 leopard skins and more than 100 skins of other endangered animals, including foxes, snakes and crocodiles.
The police arrested two Tibetan members of a gang headed by Sansar Chand, whom TRAFFIC-India director Ashok Kumar identifies as "the kingpin of animal-goods smuggling in north India" and who is absconding. On the basis of information provided by the arrested Tibetans, a second hoard of 200 kg of tiger bones was recovered from Chand's house in the commercial locality of Sadar Bazaar. Delhi's commissioner of police M B Kaushal says it is significant that some of the Tibetan refugees are involved in the illegal trade.

Officials say poaching of the Indian tiger has risen because of the increasing demand from south-east Asian countries and China, where pharmaceutical factories consume the bones of 100 tigers each year. Kumar says such demand has "decimated the tiger population in China and brought the Russian tiger to the brink of extinction". As a result, in recent years much of the demand has been met by poachers in India.

Smuggling of tigers bones and skins is a lucrative business. One kg of tiger bones fetches $90 in India and eventually earns $300 in the international market. Other animal parts are equally, if not more, lucrative. The horn of the Indian rhino, coveted as an aphrodisiac, easily fetches $3,500-4,000 in Bahrain or Singapore. Kumar points out bones and skins are smuggled from India to several countries, from Saudi Arabia to Hong Kong.

Though the success of the recent raids are encouraging, enforcement and control agencies blame the lack of staff for the rise in poaching and add that they are also ill-equipped. Says Kumar, "Apart from TRAFFIC-India, which started functioning only in January 1992, there is no intelligence-gathering network to monitor wildlife trade in the country. Data on poaching is not collected, analysed and surveyed. As a result, although authorities are aware of wildlife trade being regularly routed through Calcutta, Patna, Kanpur, Madras and Bombay, they rarely have definitive information about the important link between the village level poacher and the retailer."

Kumar also draws attention to the lengthy legal processes involved in the enforcement of the Wildlife Protection Act. Since 1991, not one person has been convicted for a wildlife offence. Chand, for instance, was first booked in September 1974 and sentenced to jail in 1981. But he did not serve it because he was granted bail by a higher court. "Even judges do not take wildlife conservation seriously," says Kumar.