Sikkim earthquake was unusual for Himalaya

It occurred due to sliding, not thrust motion

A major earthquake, measuring 6.9 on the Ritcher scale, rocked Sikkim and parts of Nepal and Tibet in the Himalaya on Sunday. The death toll, reported till late night on Monday was over 70. The United States Geological Survey reports that the earthquake centred 20.7 km below the earth's surface, around 68 km northwest of Gangtok. Two aftershocks of mediocre intensity—5.7 and 5.3 on the Richter scale—followed the quake. Heavy rain in the region trigerred landslides and hampered rescue operations.

Cupped in the lap of the eastern Himalaya, the north-eastern state of Sikkim falls in a high seismic zone. However, the region has only experienced moderate earthquakes in the past. The biggest earthquake to occur in its vicinity was the the 1934 Bihar–Nepal border earthquake of 8.3 magnitute, which caused widespread devastation and claimed the lives of about 10,000 people. The last significant earthquake in the region occured in February 2006; it measured 5.3 on the Ritcher scale.

'Strike-slip' quake
The latest disaster, experts say, is of a slightly different nature than most Himalayan earthquakes. Geoscientist Vineet Gahalaut of the National Geophysical Research Institute, a government research organisation in Hyderabad says: “Most of the Himalayan earthquakes occur because of one block of rock sliding above another (thrust motion) at the fault line. Yesterday's earthquake seems more like a strike-slip motion when two blocks slide past each other.”

A US Geological Survey report released today said: “Initial analyses suggest the earthquake was complex, a likely result of two events occurring close together in time at depths of approximately 20 km beneath Earth's surface.”

Gahalaut says this is the first major strike-slip earthquake in the region. “Other earthquakes following a similar pattern have been relatively milder and occured in areas away from habitation.” Explaining further, he says that the fault plane (line along with fault or fractures occur in the crust) of yesterday's event was almost vertical to the Himalayas. “In most other earthquakes, the fault plane is horizontal to the Himalayan surface,” he says. 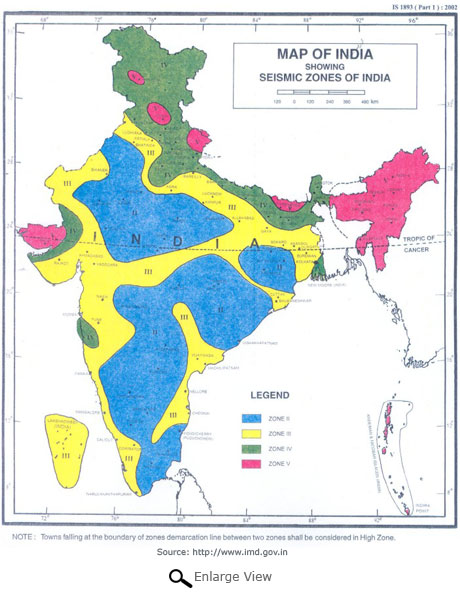 The seat of earthquakes
The Himalaya, specifically the northeastern part of the country, is a hotbed of earthquakes. The last two centuries have seen some major tectonic events in the area: the 1897 Shillong earthquake, the 1905 Kangra earthquake, 1934 Bihar-Nepal earthquake, 1950 Assam earthquake. The potent Kashmir earthquake of 2005, however, is a matter of debate among seismologists, some of whom, including Gahalaut, do not count it among the Himalayan earthquakes.

Sandeep Singh of the earth sciences department at IIT Roorkee, says: “The Himalaya is the youngest mountain range in the world. It was formed by the collision of the Indian plate and the Eurasian plate. The two plates are still moving, and their movement creates stress under the Earth's crust. This stress is released in the form of earthquakes.”

The latest event, he says, probably occured along the Main Central Thrust, a fault plane along which tectonic activity is occuring under the Himalayan crust.

Partha Chakraborty, assistant professor at the department of geology in Delhi University, says that it is likely that enough stress wasn't been relieved by the latest earthquake. “This could mean the possibility of another quake in the area in the future.” When asked about the possible range of dates for such an event, he said it was impossible to tell.

The big one's still in the making

A 2001 Science paper, co-authored by Vinod K Gaur of the Indian Institute of Astrophysics, reported that a major earthquake of magnitude 8.1 is overdue in the Himalaya.

C P Rajendran of the Centre for Earth Sciences at the Indian Insitute of Science in Bengaluru, concurs, “The earthquake Gaur's paper mentioned is expected to occur in the central Himalaya; Sikkim doesn't  lie in that area.”

He adds there's huge deficit of earthquakes in the central Himalayas. “There has been no major activity in that area for several decades now.” he adds.

The Chamoli  and Uttarkashi earthquakes of 1999 and 1991 are considered moderate by Gahalaut. “They were in the range of 6-7,” he says. “The one we're unfortunately waiting for will be really massive—in the range of 8 on Ritcher scale.”

Major earthquakes in the past