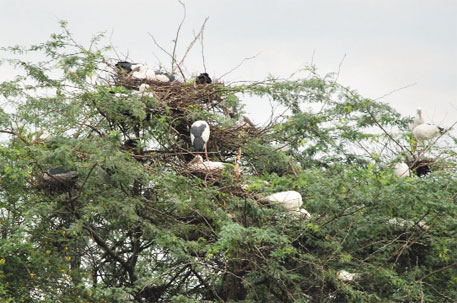 WHEN one thinks of invasions, names of kings and rulers from history come to mind. Names of plants like Prosopis juliflora, Lantana camara and Parthenium hysterophorus are never linked to invasions. However, while invading kings are now just a part of history, invasive plants are still there, and are a huge threat to the local flora, fauna and agriculture. Invasive plants are those whichÃ”Ã‡Ãªspread to regionsÃ”Ã‡Ãªother than their native and thrive to the extent of becoming a threat toÃ”Ã‡Ãªlocal species.

Prosopis juliflora (P juliflora), an exotic tree, is one of the top invaders in India. A native of South and Central America, it was introduced in India to meet the fuelÃ”Ã‡Ãªwood requirement of the rural poor and to restore degraded lands. A recent study by S Chandrasekaran, associate professorÃ”Ã‡Ãªat the department of plant sciences, school of biological sciences, Madurai Kamaraj University, and his colleaguesÃ”Ã‡Ãªhas shownÃ”Ã‡Ãªthat apart from threateningÃ”Ã‡Ãªlocal plants, with whom it competes for resources, this tree is also affecting the nesting success of birds. The study was published in the journal Current Science on March 10.

The team carried out its studies at the Vettangudi Bird Sanctuary in Tamil Nadu. The vegetation in the sanctuary is dominated by Prosopis and Acacia nilotica, a native tree variety. The forest department conducts an annual bird census in the sanctuary where it involves scholars from the local university. Chandrasekaran and his team were part of the census conducted by the forest department in 2011Ã”Ã‡Ãªduring whichÃ”Ã‡Ãªlocations of nests in Prosopis and Acacia were studied. The number of nests per tree, eggs per nest, fallen eggs and chicks, and population at the fledgling stage were recorded in the census.

The results showed that in Acacia, nests were located at nodes with more than two branches and were distributed evenly on the trees, whereas in Prosopis, they were located not just at nodesÃ”Ã‡ÃªbutÃ”Ã‡ÃªallÃ”Ã‡ÃªoverÃ”Ã‡ÃªtheÃ”Ã‡Ãªbranches.Ã”Ã‡ÃªThe number of nests on Prosopis plants was significantly higher than it was in the Acacia. No significant difference in eggs per nest was noticed between the plants but the number of fallen eggs and chicks on the ground was much higher for Prosopis. The percentage of fallen eggs and chicks on the ground per nest was 2.82 and 1.47 for Prosopis and Acacia respectively. It was also found that at the end of the reproductive cycle, on an average, there were four or more birds (including parents) per nest in Acacia but only three in Prosopis.

“Our preliminary observation reveals that during nest construction and reconstruction process, the wetland birds preferred new twigs of Acacia than those of Prosopis,”Ã”Ã‡Ãªsays Chandrasekaran. As is evident, the invasive species draws birds into unfamiliar zonesÃ”Ã‡Ãªthat are inadequate for its nesting requirements and this results in smaller population of the bird.

Native of South and Central America, Prosopis juliflora was introduced in India as a fuel wood for rural poor

Commenting on the study, Gyan Prakash Sharma, assistant professor, department of environmental studies, University of Delhi, says, “The study has addressed the growing concern of proliferation of exotic species across the globe and identified potential threats associated with the phenomenon. In context of the current paper, it is advisable to conserve the native vegetation and/or restore it to the original condition through policy interventions and management efforts.”

Chandrasekaran is in complete agreement and suggests a three-pronged approach to limit the damage— regular mechanical removal of P juliflora before the arrival of the birds to the sanctuary, plantingÃ”Ã‡ÃªmoreÃ”Ã‡ÃªAcacia nilotica instead of P juliflora, and removal of terrestrial vegetation along the ponds in the sanctuary to reduce predator habitat.