A new technology may reduce noise pollution from trains to half 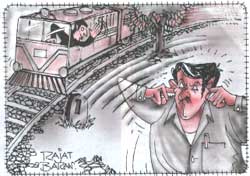 EUROPEAN railways may have found an answer to one of the most common complain they face - the noise pollution. By using small knee-high noise barriers along the railway track and an acoustic hood that shrouds the train's wheel, train noise can be reduced to half, say researchers at TNO, the Netherlands applied research organisation in Deft. A stationary one-third model train was blasted in a laboratory with loudspeaker producing sound at 110 decibels to test the theory. According to Marcel Janssen, of the TNO Institute of applied studies, the theory is based on the principle of "reciprocity". A barrier that is effective in slopping noise from a loudspeaker placed beside a track from reaching the train, will be equally effective in preventing the train noise from reaching the trackside listener.

Janssen believes that it is easier to take measurements in the laboratory than exciting noise in a model train. The contact between the steel rail and train wheels is the main source of noise. Freight wagons and old passenger coaches are with clasp brakes - iron pads that clamp the sides of the wheels to stop the train - are the main culprits as far as noise pollution is concerned. In the case of the later, wheels have to stand prolonged braking. "For train climbing an inclined surface, brakes have to be applied for tens of kilometres, says Janssens. Even though the wheels are circular when they emerge from the workshop, repeated braking makes them almost polygonal. Rails pass the sound to the sleepers and the wheels pass the sound to the rest of the vehicle and each of these sources has its own frequency spectrum.

Some European railways have been able to cut noise with large barriers at the edge of the line, but the technology is expensive and intrusive. Netherlands railways have tied up with TNO to find ways of cutting noise that would be compatible with the present trains and tracks. TNO has found some old data of noise reduction experiments which were carried out by the British Rail, former state owned railway operator in Britain.

The researchers found that a 60-centimetre (cm) high barrier close to the track, coupled with housing that partially encloses the wheels and the bogies, would reduce the train noise by six to eight decibels. The barrier, which should be made of a sound absorbing material, will have to be placed some 50-cm from the edge of the track. The acoustic hood on the other hand could be made of metal or plastic.

"We would seriously consider anything that would mitigate noise", says a spokesperson for Railtrack, owner of Britain's railway lines.