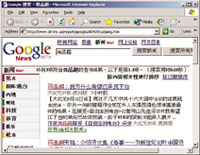 Google, which often professes to lead the fight for free access to information has said it will censor its search services in China in order to gain greater access to China's fast-growing market. Google has offered a Chinese language version of its search engine for years but government's blocks on the site have frustrated users. Now Google is setting up a new site -- www.google.cn -- which it will censor itself to satisfy the authorities in Beijing.

Observers warn the new version could restrict access to thousands of terms and web sites that hurt the sensibilities of Chinese authorities. Such topics are likely to include independence for Taiwan and the Tiananmen Square massacre. But Google, on the defensive, argued it would be more damaging to pull out of China altogether.

The Chinese government keeps a tight rein on the Internet and what users can access. The bbc news website remains inaccessible in China.

Google's move in China comes less than a week after it resisted efforts by the us department of justice to make it disclose data on what people were searching for. But China is a growing market for Google. The number of Internet users in China is predicted to increase from about 100 million currently to 187 million in two years time. A survey in August 2005 revealed Google was losing market share to Beijing-based rival, www.baidu.com.